“Mistress Suffragette” is the recipient of three Reader Views 2017-2018 Literary Awards, obtaining First Place for Best Romance, the Northeast Regional Award Winner, and the Garcia Memorial Prize for the Best Fiction Book of the Year. 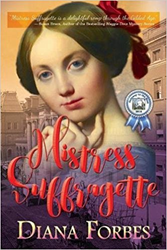 This novel will give you insight into the incredible courage of the early Suffragettes and the importance of equal rights.

Diana Forbes makes a stunning entry into the literary world with her debut novel, “Mistress Suffragette.” Featuring a strong female protagonist representing themes and human rights issues still relevant in today’s times, readers are drawn into the early Women’s Suffrage Movement in the U.S. in the struggle to find empowerment and a voice in an age where women are second-class citizens, and not treated equally under the law.

As a debut novel, “Mistress Suffragette” is certainly receiving a lot of recognition. Along with the Reader Views Reviewers Choice Awards, honors also include first prize in Women’s Fiction at the Missouri Romance Writers of America (RWA) “Gateway to the Best” contest, first place in the Chanticleer Chatelaine awards for Historical Romance, and was shortlisted for the Somerset Award for Literary Fiction. It also placed as a finalist in the Wisconsin RWA “Fab Five” contest for Women’s Fiction, the Silver medal in the North American Book Awards for History, and as Winner of the Book Excellence Award for Romance. Diana Forbes also received a nomination as one of the Top Female Authors of 2017 from the Authors Show.

With a phenomenal fan base that is growing daily, accolades continue to pour in from readers. Juliana Leal, a reviewer with Reader Views says of “Mistress Suffragette,” – “This novel will give you insight into the incredible courage of the early Suffragettes and the importance of equal rights.” Grady Harp of San Francisco Review of Books says, “Writing of this quality is rare and it serves as a very welcome debut for Diana Forbes who is writing about subjects that could not be more current!”

Ms. Forbes is also gaining considerable praise from fellow authors: “In this superbly crafted novel, rich with historical detail, Diana Forbes transports the reader to the Gilded Age and creates an unforgettable protagonist in Penelope Stanton.” — Phyllis T. Smith, Bestselling author of “I Am Livia” and “The Daughters of Palatine Hill.” Diana Spechler, author of “Who by Fire” and “Skinny” calls “Mistress Suffragette,” “…a joy ride through late 19th Century New England, a comedy of manners from a new and exciting voice in historical fiction. This novel picks up where Jane Austen left off.”

Reader Views reviews thousands of books each year by self-published and small press authors. Its Annual Literary Awards recognize the very best of these up-and-coming authors.

Diana Forbes is a 9th generation American, with ancestors on both sides of the Civil War. Diana Forbes lives and writes in Manhattan. When she is not cribbing chapters, Diana Forbes loves to explore the buildings where her 19th Century American ancestors lived, loved, survived and thrived. She is passionate about vintage clothing, antique furniture, ancestry, and vows to master the quadrille in her lifetime. Diana Forbes is the author of New York Gilded Age historical fiction.