WaterAid: 60% of the Planet Now Lives in Water Stressed Areas

New report ranks nations according to access to water 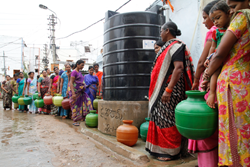 Women line up to collect water from the common water source in Anna Nagar Basti, Hyderabad.

WaterAid's report, State of the World's Water 2018: The Water Gap, reveals that the number of people living without access to clean water is rising. Uganda, Niger, Mozambique, India and Pakistan are among the countries where the highest percentage or largest number of people cannot easily get clean water.

The report, released on March 22 for World Water Day, also includes new data on the sizeable gap between rich and poor when it comes to water access.

Some 844 million people are now struggling to access life’s most essential requirement – an increase of nearly 200 million from last year. The increase reflects a stricter definition of access by the Unicef-WHO Joint Monitoring Programme. Access is now defined as being able to collect water within a 30-minute round trip of home.

“The bottom line is, we aren’t making progress fast enough. It’s shocking that 60 percent of the people on this planet are living in water stressed areas, a number that’s only expected to increase. We must do better. Without water and sanitation, none of the goals to alleviate poverty, improve health and create a fairer and more sustainable world, will be achieved. Water as a human right that can no longer be ignored.”

Consider this: a woman collecting the UN-recommended amount of 50 liters per person for her family of four from a water source 30 minutes away would spend two and a half months a year on this task. This prevents her from earning an education, earning a living, and even from political participation. In turn, it limits economic growth worldwide.

These new data are particularly important as the White House is proposing a 30% cut to funding for USAID and the Department of State as requested in the President’s Fiscal Year 2019 budget. Instead of weakening USAID and the US diplomatic corps, WaterAid’s report is a call to action for Congress as they prepare their own FY19 funding priorities, which must include safe drinking water, sanitation and hygiene. Faster progress on all three will save lives, boost development and change the lives of billions of people living in extreme poverty globally.

The Administration must fully implement the Senator Paul Simon Water for the World Act and its own Global Water Strategy, fulfilling its commitment to target resources to the poorest of the poor, those who make up the 884 million people without clean water today.

“We are at a critical juncture in the fight to get clean water, decent sanitation and good hygiene to people across the world. Current efforts by the Administration to restructure USAID and restrict global investments in areas like clean water run counter to public opinion as well as long-standing commitments to prioritizing the water crisis. We must all hold the United States accountable for its own promises to people at home and abroad.”

This World Water Day, WaterAid is calling for the U.S. government to fully fund the foreign aid budget, including the State Department and the U.S. Agency for International Development (USAID), which work to eradicate poverty, fund vital water and sanitation programs and uphold our reputation as a nation of prosperity and goodwill.

Highlights from the report:

WaterAid is working to bring clean water, decent toilets and good hygiene to everyone, everywhere within a generation. The international nonprofit organization works in 34 countries to change the lives of the poorest and most marginalised people. Since 1981, WaterAid has reached 25.8 million people with clean water and 25.1 million people with decent toilets. For more information, visit WaterAid.org/us, or follow @WateraidAmerica on Twitter and Facebook.

844 million people in the world – one in nine – do not have clean water close to home.

2.3 billion people in the world – almost one in three – do not have a decent toilet of their own.

Around 289,000 children under five die every year from diarrheal diseases caused by poor water and sanitation. That's almost 800 children a day, or one child every two minutes.

Every $1 invested in water and toilets returns an average of $4 in increased productivity.

Just $24 can provide one person with clean water.

To find out if countries are keeping their promises on water and sanitation, see the online database WASHwatch.org.

A young Rohingya girl takes a water break on her way uphill to her family’s temporary shelter at the Kutupalong Camp in Cox's Bazar.WaterAid/ Al Shahriar Rupam