Kuwait and UAE are witnessing the fastest jobs growth. Oil & Gas, healthcare and banking sectors are hiring most actively. Skills most in demand are finance, HR and marketing. 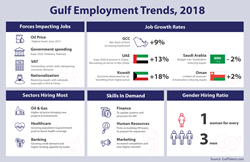 Across the Gulf region, Finance, HR and Marketing professionals are most in demand

The Gulf job market is set to grow at an average rate of 9% this year, according to research conducted by GulfTalent, one of the largest online recruitment portals in the Middle East.

The results are based on GulfTalent’s survey of over 1,100 CEOs and executive managers of firms across the six-member Gulf Cooperation Council (GCC).

According to survey findings, the biggest factor driving employment growth is the recent rise in oil prices and resulting upturn in business optimism. The price of crude oil, which had been in the 30 to 50 US dollar range for much of 2016 and 2017, has been averaging over 60 US dollars in the past six months.

Kuwait is set to have one of the fastest rates of job creation, with a net 18% of firms increasing headcount. The country, which has the region’s highest dependence on the oil & gas sector, is witnessing a boom thanks to higher oil prices. According to the IMF, it is expected to have the Gulf region’s fastest economic growth this year.

In the UAE, a net 13% of firms are reporting an increase in personnel, driven by a recovering oil sector in Abu Dhabi as well as growth in Dubai’s non-oil sector, including the impact of infrastructure spending for Expo 2020.

The Saudi job market is shrinking this year, with a net 2% of firms reporting a reduction in headcount, mainly due to the government’s enforcement of stringent Saudization policies. While the policy has boosted employment opportunities for Saudis, some firms are seeking to achieve mandatory Saudization ratios by simply reducing their expatriate workers. Overall, more expats are leaving the job market than the Saudis being hired.

Jobs growth in Oman at 2% has been similarly weak. Limited oil reserves have curbed the upside of oil price recovery, while strict Omanisation policies are limiting companies’ ability to hire expatriates.

Following substantial downsizing over the last 3 years, the oil and gas sector is now witnessing the Gulf region’s fastest headcount expansion, with a net 39% of firms expanding their workforces to take advantage of new projects and business opportunities.

The healthcare sector also continues to expand, thanks to a growing domestic population and a regulatory push to increase health coverage.

Banking is another sector witnessing a healthy growth, as the improving macroeconomic environment translates to increased demand for credit and higher lending appetites of financial institutions.

FMCG is another weak sector, registering only 6% growth in headcount. Consumer demand in the region has taken a hit from the introduction of VAT in the UAE and Saudi Arabia, excise taxes on certain goods such as carbonated drinks, reduced subsidies hitting disposable incomes, and the declining expatriate population in some countries.

In terms of demand for skills, the largest upsurge is for finance professionals, thanks to the introduction of Value-Added-Tax (VAT) and the need to update finance processes and systems.

Demand for human resource professionals ranks second as companies seek to re-build HR teams that were drastically reduced over the last three years and to prepare for expansion.

Marketing professionals are also in demand as companies fight for customers in an increasingly competitive marketplace, while digital and mobile transformations are forcing firms to develop new marketing channels.

The survey found that employment across the region remains dominated by men, with companies hiring on average 1 woman for every 3 men employed. Healthcare and education are the only sectors with a majority of vacancies filled by women.

Bahrain and Kuwait are the region’s most female-friendly countries, with roughly one woman hired per two men. In Saudi Arabia, where the workforce has been historically male-dominated, there has been an acceleration in female hiring. Some Saudi employers surveyed even stated a preference for female employees, citing higher efficiency and lower salary expectations as compared to their male peers.

GulfTalent’s study was based on a survey of 1,117 senior executives, including CEOs and senior managers of companies across the six countries of the Gulf Cooperation Council (GCC). The survey was conducted during February and March 2018.

GulfTalent is a leading online recruitment portal in the Middle East, covering 9 countries across the region. It is a key provider of both national and expatriate talent to over 9,000 employers across all industries, and is used by over 7 million professionals and managers for finding top career opportunities in their field.