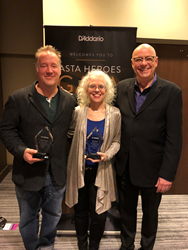 “...Martha and Christian each demonstrate their commitment to their craft and exemplify what it means to be a part of the Yamaha family. Not only are they pioneers in performance and creative forces educationally, but also incredibly loyal and helpful to Yamaha," said John Wittmann, Yamaha.

Yamaha honored two of its longtime string artists—Martha Mooke and Christian Howes—for their 20 years as Yamaha artists and commitment to music education.

The two members of the Yamaha strings family were recognized at a special celebration on March 9, 2018 at the American String Teachers Association (ASTA) Conference in Atlanta.

Mooke and Howes were each presented with crystal awards by John Wittmann, director of artist relations and education, Yamaha Artist Services Indianapolis.

“As two of the very first Yamaha strings artists, Martha and Christian each demonstrate their commitment to their craft and exemplify what it means to be a part of the Yamaha family,” said Wittmann. “Not only are they pioneers in performance and creative forces educationally, but also incredibly loyal and helpful to Yamaha.”

Mooke is the founder and artistic director for the Scorchio Quartet, which is featured on David Bowie’s Heathen CD and at the annual Tibet House Benefit Concerts at Carnegie Hall produced by Philip Glass.

Aside from performing and touring, Mooke is a clinician on electric strings and alternative approaches to playing. She serves on the Grammy Career Day and Advocacy Committees of the Recording Academy and on the Composers Now Advisory Board.

Christian Howes began studying classical violin at the age of five. At 16, he performed as a soloist with the Columbus Symphony Orchestra and earned a bachelor’s degree in Philosophy from Ohio State University. At 20 years old, Howes was a regular performer at gospel church services, where he began to shift his style to one focusing primarily on jazz. In the 21 years since that shift, Howes has gained great notoriety from critics and players as one of the world’s most respected jazz violinists. For 11 years, Howes worked with Les Paul and became an in-demand artist on the New York scene. He collaborated with jazz artists including Greg Osby and D.D. Jackson and had a four-year gig with Bill Evan’s “Soulgrass” band. In 2008, Howes signed with Resonance Records and released two successful albums.

In 2011, Howes was ranked the number 1 “Rising Star” in the Downbeat Critics Poll and in 2013, was voted among the top three violinists in JazzTimes magazine’s “2012 Expanded Critics Poll.” Aside from performing, Howes launched his online lessons website “Creative Strings Academy,” which has the largest enrollment worldwide of string players studying jazz and improvised music. Since 2007, Howes has also built an online production business, “Christian Howes String Recording,” which provides live string sections as a collaborative “virtual” orchestra for music producers around the world. Today, he is an active blogger and clinician on music education and music business at schools and conferences.