TV veterans Phil Conserva and Louis Milito team up with Dale Wiley to create new podcast and stories, ink option to create serialized crime based on the well-known area of vice set in Illinois 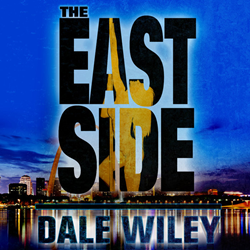 The East Side podcast

This world is one we haven't yet seen. It's ready to be explored by a larger audience.

Veteran TV producers and directors Louis Milito and Phil Conserva found out that their friend of a decade had a story to tell. The former CSI producers and directors, now working on projects as diverse as Gotham and Training Day, discovered that their long-time friend Dale Wiley, a Missouri author and lawyer, had penned a multi-media concept based on the no-holds-barred world of the small boroughs just east of St. Louis, from Sauget to Washington Park, known as The East Side.

"We were really gripped by the drama in Dale's idea, and decided it was worth spending some time with," said Conserva, who first worked with Wiley on various environmental projects more than ten years ago. "Dale has clued me in that he saw this area as a drama that hadn't previously been told. I told him to work on the idea, and when he got back with me, he had created a whole world that actually needed more than just TV to tell the story."

To that end, Wiley started working on parts of the idea. "The story told in the podcast is an example of finding ways to tell the stories in different ways," Wiley said. "The first TV story is very visual and fits more with Phil's and my idea of playing with the idea of Dante's Inferno, set in a fictional high-end gentlemen's club, just into Illinois. But it wouldn't make a good podcast. It's too image-heavy." Instead, the podcast, which is available to subscribe to for free on Apple, Stitcher, Google Play and TuneIn, among others, looks at what seems to be a crime, told from the multiple perspectives of the participants and unraveling the nature of truth. "It seems funny to say, but these stories have elements of many influences and allusions sprinkled throughout," Wiley said. "Everything from, of course, Dante, to Gatsby, with some Kurosawa and Billy Wilder as well," This may be set in the popular clubs of The East Side, but this is a far cry from other, less meaty material."

In addition to the podcast, there is a continuing short story, the first segment available for free by going to TheEastSide.tv and following the instructions for download. It is also available at iBooks, Barnes and Noble and Smashwords for free.