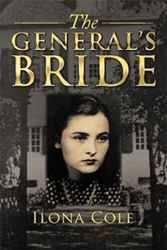 Author Ilona Cole shares that her husband was fascinated by her family’s background and wanted her to write a novel inspired by her story. When Cole’s husband died, she decided to pen and publish “The General’s Bride” (published by Xlibris) to honor his wish. The tale reflects on how so many families suffered and what they had built have been destroyed in a war.

According to Cole, the book follows the life of Elisabetha (Lizzi) and her two sisters, Frieda and Katrina (Katja), from their childhood into adolescence and into young ladies—into their most exciting times in their lives of love, marriage, losses and heartbreaks up to World War II and beyond, when all their lives were shattered.

Cole believes that “we are still at war” and she intends to open the minds of the readers on the effects of war through the story of one family. “The younger people could learn from that, who’s dreams and hopes can be shattered, just of some ignorant person wanting more power and fame,” Cole concludes.

An excerpt from the book:
Waiting seven years for the return of a loved one to find that the train is arriving from a Russian prisoner of war camp in Sibiria, August, and to find out if he after all these years recognizes his two daughters.

About the Author
Ilona Cole was born in 1927 in Germany to Lizzi and August. In 1946, after her degree in international law and commerce, she could not find a job in her field, so she went to work for Gen Eisenhower’s Supreme Command Headquarters in Frankfurt, Germany. There in 1953 she met, fell in love with Sgt. Halvor L Cole, they married and after she received her entry permit, she came to the United States in 1954.