Connected by AI algorithms, a group of SXSW attendees formed a “Hive Mind” with the help of researchers from Unanimous AI to converge on an optimized priority for United Nation’s global goals; SXSW results echoes previous Swarm AI study that generated an optimized response to Amazon’s Jeff Bezos request on Twitter for ideas on how to use his fortune “here and now” at the “intersection of urgent need and lasting impact” 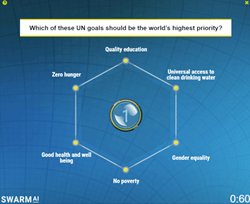 By building this Hive Mind at SXSW, we were able to combine real-time human values with AI algorithms and converge on a socially optimal recommendation for the UN’s priority global goal: clean water for all.

As the world prepares for World Water Day on March 22, researchers at Unanimous AI connected a group of South by Southwest (SXSW) attendees into a real-time Swarm AI system or “Hive Mind” to generate optimized insights. Unanimous posed diverse questions about domestic and world issues to the SXSW swarm including this: Which of the United Nation’s Sustainable Development Goals should be the world’s highest priority?

Awarded the SXSW Innovation Awards 2018 “Best in Show” and “AI Innovation of the Year,” Unanimous AI has pioneered a new form of AI known as Artificial Swarm Intelligence or Swarm AI. Modeled after swarms in nature, the technology connects groups of people into real-time closed-loop systems, amplifying human intelligence. The technology has the potential to create super-intelligent systems that inherently maintains human values, emotions and interests.

Swarm AI has generated remarkably precise insights across a wide range of fields, from politics and finance to sports and entertainment. Recently, Swarm AI predicted winners of the 90th Academy Awards with 94% accuracy, outperforming all movie experts. Last year, Swarm AI technology predicted the Kentucky Derby Superfecta at 540-to-1 odds.

At the SXSW Interactive Festival, Unanimous AI built a swarm comprised of 70 attendees. Connected by AI algorithms to enable them to “think together” to form optimized responses, the swarm participants considered diverse topics, including world priorities. In 2015, the United Nations agreed to a better world by 2030, forming a list of Sustainable Development Goals. The SDGs are a universal call to action to protect the planet and ensure that all people enjoy peach and prosperity. With those values in mind, the Unanimous AI research team posed this question to the Hive Mind:

Which of these United Nation’s Sustainable Development Goals should be the world’s highest priority?

In considering the world’s top priorities, the SXSW Hive Mind converged with high confidence on a collective response: “universal access to clean drinking water” should be the UN’s top priority.

In a conversation with Gary White, co-founder along with Matt Damon, of Water.org and WaterEquity, Gary said: “Lack of access to clean water is the single most crippling factor holding back humanity. Enabling SXSW attendees with diverse perspectives to think together about world issues is an innovative use of artificial intelligence. By thinking — and working together – we can solve the global water crisis in or lifetime.”

“Without access to safe water, the cycle of poverty cannot be broken,” Damon said. In his Water.org video statement, Damon commented about the UN’s Sustainable Development Goals. “Let’s make SDG number six…number one. We can be the generation that ends the global water crisis.”

White and Damon’s work with Water.org and WaterEquity focuses on removing financial barriers standing between those living in poverty and access to vital household water and sanitation.

“With the rise of AI, it’s important to keep human knowledge and wisdom in the loop, especially when weighing complex social priorities,” said Dr. Louis Rosenberg, CEO of Unanimous AI. “By building this Hive Mind at SXSW, we were able to combine real-time human values with AI algorithms and converge on a socially optimal recommendation for the UN’s priority global goal: clean water for all.”

The SXSW results echo the findings of a study conducted last year by Unanimous AI. In August 2017, Unanimous distilled thousands of Twitter suggestions answering Amazon’s Jeff Bezos question about how he should use his fortune “here and now” at the “intersection of urgent need and lasting impact.” A swarm of 100 people across the U.S. decided making clean water accessible worldwide would be the optimal use of Jeff Bezos’ philanthropic funds.

Swarm Intelligence, the science behind Swarm AI technology, goes back to the birds and the bees. In fact, it goes to all creatures that amplify their group intelligence by forming flocks, schools, colonies and swarms. Across countless species, nature show us that by forming closed-loop systems, groups can produce insights that greatly exceed the abilities of any individual member. While humans have not evolved this ability naturally, Swarm AI technology enables it artificially, allowing groups to amplify their intelligence by forming real-time swarms.

Unanimous AI and Oxford University have conducted rigorous validation studies, comparing the effectiveness of Swarm AI to standard crowdsourcing as a means of harnessing insights of populations. In one published study, researchers found that by forming real-time, closed-loop swarms moderated by AI algorithms, the accuracy of insights was amplified by 145% when comparing small swarms of 30 people to large crowds of over 400. In another published study conducted over six months of weekly forecasts, insights were amplified by 131%.

About Unanimous AI
Unanimous AI is a Silicon Valley company that has pioneered Swarm AI® technology, a new form of AI that combines real-time human insights and AI algorithms modeled after natural swarms. Unanimous has generated an impressive track record of predictions, forecasts and insights. The company’s technology has outperformed traditional AI systems and human experts in many high-profile challenges. Swarm AI was recognized among D/SRUPTION’s 5 Biggest AI Advancements of 2017 and among the Top 10 Tech Trends Transforming Humanity by Peter Diamandis. Learn more at http://unanimous.ai

Unanimous AI is a Silicon Valley company that has pioneered Swarm AI® technology, a new form of AI that combines real-time human insights and AI algorithms modeled after natural swarms.