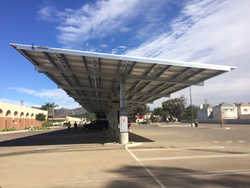 One of DDE’s 2017 projects included a 167kW solar photovoltaic system for Palomar College in Escondido, CA (Phase I). The second phase will be completed in 2018 at the San Marcos campus.

Managed growth will continue to be a focus for us in 2018, as we continue to expand our team with experienced engineers who thrive on tackling engineering challenges for our customers,” said Brian Dersch

Dersch Design & Engineering (DDE) teams up with engineers, contractors and architects to solve complex engineering design challenges for commercial, higher education, government and renewable energy / microgrid projects. The firm is pleased to report 2192% growth since its founding in 2013, with 185% increase realized year-over-year for 2017.

One of DDE’s customers, Stone Edge Farm Winery, was named one of the 13 winners of California’s highest environmental honor, the Governor’s Environmental and Economic Leadership Award (GEELA). The project consisted of the design of a microgrid utilizing state-of-the-art energy storage and power generation technologies such as solar photovoltaic, battery storage, fuel cells, microturbines, and hydrogen energy storage. Numerous service entrances were upgraded to combine multiple parcel electrical systems into a single, cohesive power distribution system. Stone Edge Farm was one of five awardees in the Sustainable Practices category for its “advanced technology to generate, store and distribute clean energy to its property and beyond.”

Dersch Design & Engineering was ranked #46 on the 2017 San Diego Business Journal list of top engineering firms and #39 on the 2018 list based on the number of full-time licensed engineers as of January 1, 2018.

Founder and CEO Brian Dersch, P.E., LEED AP, was recognized as one of San Diego’s 2017 40 Under 40 brightest young leaders by SD METRO magazine. The 17th annual awards ceremony was held on September 26, 2017. Criteria for the honor included business and professional achievements along with community involvement. It was noted that Dersch demonstrates vision, enthusiasm and determination. As an exemplary corporate citizen, he is helping businesses and communities throughout California through his electrical and renewable engineering work for higher education, federal government, public utilities, commercial, and microgrid projects.

Local San Diego online magazine SD Voyager interviewed Dersch for its most inspiring story feature for the December 2017 issue. The publication looks for independent entrepreneurs, freelancers and other risk takers that make San Diego an exciting place to live. In his interview, Dersch was asked what sets DDE apart from other engineering firms. He answered, “We approach our projects from a variety of different perspectives. We look at the motivation of all the people who are involved in the project. I’ve seen how utility companies interface, how the design teams design, and how the construction teams build it. We take multiple people’s opinions and goals into account. It ultimately boils down to having a clear view of the big picture.”

“2017 was an outstanding year for Dersch Design and Engineering,” said Dersch. “As we move forward, our number one priority is to provide the best and brightest engineers interested in developing the future of the renewable energy industry. Managed growth will continue to be a focus for us in 2018, as we continue to expand our team with experienced engineers who thrive on tackling engineering challenges for our customers.”

One of DDE’s customers, Stone Edge Farm Winery, was named one of the 13 winners of California’s highest environmental honor, the Governor’s Environmental and Economic Leadership Award (GEELA).