“The Insatiable Pride” from Christian Faith Publishing author Rosanna Abanonu tells the tale of how Satan’s greatest weakness leads to his eternal downfall. God knows the devil’s heart and his hideous aspiration; thus He has the power to destroy him. 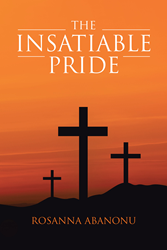 “The Insatiable Pride”: the story of Satan’s demise. “The Insatiable Pride” is the creation of published author, Rosanna Abanonu. Rosanna is a retired schoolteacher who taught for over twenty-five years before she returned to college for her master’s degree in special education. Rosanna was born into a Christian family then raised by her maternal uncle and his wife. Her uncle was a principal at a Christian elementary school where his wife was also a schoolteacher. As a child, Rosanna loved to hear the stories about the important personalities found within the Bible. When she became an adult, she realized that these stories were written in a nutshell, very much condensed. Now that she has read the Bible over and over again, she is inspired to write creative fiction books based on stories and teachings from the Bible.

“Who knows the heart of Satan? Who can fathom the depth of his wickedness? It is no other than the spirit of the Almighty God. He and He alone knows every aspect of Satan’s hideous aspirations; all his gross, wicked, and devastating agendas for men lay bare before the Holy Spirit. He sees and understands them all, even before Satan puts any of them into action.” --Rosanna Abanonu

Published by Christian Faith Publishing, Rosanna Abanonu’s new book unleashes the power of the Holy Spirit power to obliterate and reduce to nothing the evil agenda of the wicked one.

Satan’s success on Earth started as soon as the fall of Adam and Eve. He took from them the glory, power, and dominion they had over all things on Earth, which was given to them by God. His victory over Adam and his descendants allowed him to develop an insatiable, all-consuming pride. He believes that the Earth is his. He believes that he is the ruler and king of all. He believes no power can snatch it from him.

The battle Christian and Jews face against Satan is like a story. As Christians we know how the story will end for it is all reveled in the last book of the Bible although the prophecies have yet to be fulfilled. The return of Christ, the judgment of nonbelievers, the war of Armageddon, and the departure of Satan have yet to happen. Afterwards, there shall be peace on Earth. The glory, the righteousness, and the love of the Almighty God shall reign supreme. “The Insatiable Pride” is the story of how Satan’s insatiable pride leads to his own downfall.

View a synopsis of “The Insatiable Pride” on YouTube.

Consumers can purchase “The Insatiable Pride” at traditional brick & mortar bookstores, or online at Amazon.com, Apple iTunes store, or Barnes and Noble.

For additional information or inquiries about “The Insatiable Pride”, contact the Christian Faith Publishing media department at 866-554-0919.