Recent release “Hot and Cold Running War” from Page Publishing author Captain Eugene Ray Martin is a tantalizing account following two protagonists—an NSA agent and his KG girlfriend—who are caught in a conflict between international superpowers on the brink of another world war. 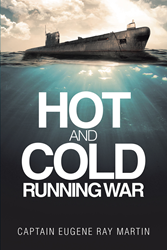 Captain Eugene Ray Martin, a merchant mariner with a US Coast Guard’s master’s license and a former US Navy who enjoys practicing with guns, playing chess, riding motorcycles, and camping, has completed his new book “Hot and Cold Running War”: an intriguing fictional story based on the actual events of the cold war between world powers.

Author Martin shows shattered allegiances and conspiracies used as leverage to gain the upper hand in disputes: “The KGB agent drove to Boston to develop the film because he knew someone there who will secretly develop the little rolls of film. The KGB agent looked at one of the photos while he drove back to Washington DC; startled, he drove off the freeway and hit a small sign. He quickly drove back on the freeway. He stopped at the next coffee shop to look at the photographs. He looked at the photographs of TOP SECRET SPECIAL CATEGORY, SPECAT, and single integrated operational plan, SIOP. The book described how America intended to respond with nuclear weapons if World War III began between Russia and America. It described the locations from where Polaris missile submarines will launch their deadly cargo. It described what route American B-52 bombers planned to follow to attack the Soviet Union. It listed what targets America will attack. He realized he must make more copies, so he called his contact in Boston.”

Readers who wish to experience this tantalizing work can purchase “Hot and Cold Running War” at bookstores everywhere, or online at the Apple iTunes store, Amazon, Google Play, or Barnes and Noble.