The Los Angeles-based personal injury law firm comments on a recent article that, even if self-driving cars eventually reduce the number of road accidents involving pedestrians, caution will always be required. 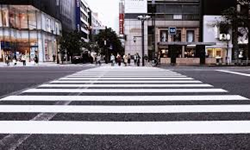 Even a well marked crosswalk is no guaranteed of a pedestrian's safety.

Whatever happens in the future, pedestrians should avoid the temptation to take their safety for granted when they set foot on to an urban or rural street.

A March 21 article on CNN Tech argues that, despite the recent tragedy in Tempe, Arizona when a female pedestrian was killed in a collision with a self-driving vehicle, robot cars will still be safer than human driven cars, and they will continue to grow even safer over time. Legal Defenders at the Law Offices of Burg & Brock, a personal injury law firm based in Los Angeles, say that while the notion that cars not subject to such human failings as distraction or substance-related impairment is persuasive, whatever happens in the future, pedestrians should avoid the temptation to take their safety for granted when they set foot on to an urban or rural street.

Whether drivers are human or AI-assisted, it’s crucial that pedestrians never take it for granted that oncoming vehicles will stop for them, says Legal Defenders. Simply being in a crosswalk, or even walking with the light can induce a dangerous and false sense of security. Just because it’s legally required that drivers stop for pedestrians in a crosswalk doesn’t mean that drivers are actually going to stop for certain, says the law firm. Of course, worse than walking through a crosswalk without paying attention, is any type of jaywalking. Even in situations where it might appear as if there’s no traffic, pedestrians should always try their best to cross legally. A car could, for example, come barreling down a seemingly deserted road at any time and, if the driver isn’t paying sufficient attention or is driving recklessly, the pedestrians’ right-of-way won’t make any difference, says the law firm.

Legal Defenders notes that it is entirely possible that the most optimistic voices supporting the development of driverless cars will turn out to be correct and the overall number of potentially deadly collisions involving pedestrians will decrease over time. However, if you or a loved one is a victim of an injury car accident, its small comfort to know that they have decreased generally. The law firm adds that, over time, the overall goal should be to reduce traffic deaths and injuries to as close to zero as possible, and that will require ongoing awareness and education of the public, from kindergarten children to grandparents, on the need to remain vigilant, no matter how much safer cars may become. The only time it won’t be necessary to stop looking both ways before crossing the street – even when the light is with you – is when we no longer have streets at all, says the law firm.

To find out more about Legal Defenders at the Law Offices of Burg & Brock call (800) 926-8197 or visit the firm’s website at http://www.LegalDefenders.com.