Deciphering The Perplexity Of Murder 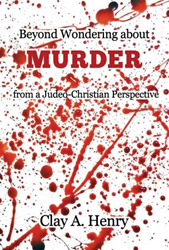 There are several factors that play a part in murderers, which include spiritual unawareness, envy, heart hardness and evil desires

Throughout history, murder is one of most horrifying actions taken against humanity. However, it's important to go beyond the physical realm in order to unravel the mystifications of murder.

Although the topic of murder is repulsive and revolting, numerous people are inquisitive about what might provoke a person or group to commit such a horrendous crime.

"There are several factors that play a part in murderers, which include spiritual unawareness, envy, heart hardness and evil desires," Clay Henry states. "Moreover, the Bible tells us that there is an identifiable root cause behind all who take the lives of other humans. This cause amounts to a form of spiritual lawlessness that desperately needs to be divinely forgiven.

"The Bible tells us of such a supernatural provision which totally accomplishes this acquittal," the author adds. "This merciful action is primarily found in the New Testament and is called the Good News. Those who rejected this offer and continued their evil ways were destined to eternal life in a place of unending torment and punishment. This is an ultimate message for all humans, including those who murder."

Clay Henry practiced general dentistry for many years. He also served as a professor at Baylor College of Dentistry. His previous books were Self Exposed: Uncovering Dynamics of the Spiritual Self and Your Health in a World of Conflict.

Xulon Press, a division of Salem Media Group, is the world's largest Christian self-publisher, with more than 12,000 titles published to date. Retailers may order Beyond Wondering about Murder from a Judeo-Christian Perspective through Ingram Book Company and/or Spring Arbor Book Distributors. The book is available online through xulonpress.com/bookstore, amazon.com, and barnesandnoble.com.