Author William S. Bradshaw’s Newly Released “King’s Dagger: The Loyalist Book 1” is the Beginning of One Assassin’s Mission to Save the Israelite Nation of King Saul

“King’s Dagger: The Loyalist Book 1” from Christian Faith Publishing author William S. Bradshaw is the story of ancient Israel’s struggle to survive. As a fledgling nation surrounded by enemies in the promise land, the nation of King Saul will place its survival in the hands of a merciless assassin called the King’s Dagger. 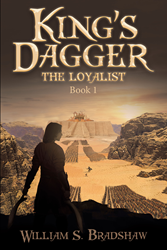 “King’s Dagger: The Loyalist Book 1”: an assassin’s mission to save the fledgling nation in Israel and find personal salvation. “King’s Dagger: The Loyalist Book 1” is the creation of published author, William S. Bradshaw. William was a combat medic in the US Army for nearly twenty years. Before and since joining the military, he has been an avid fan of science fiction-fantasy and action adventure stories. He has also had a lifelong fascination with military history and the Old Testament. During his time in the service, he traveled the world, which afforded him the opportunity to visit the sites of the ancient kingdoms and battlefields. His experiences inspired him to write “King’s Dagger” during one of his two tours in Iraq. William retired from the army in 2013 due to injuries received during Operation Iraqi Freedom. He now lives in rural Oklahoma with his wife, Amanda, and two of their five children.

“David stood alone in the center of the vale, holding high the giant’s head and allowing the blood to flow freely down his outstretched form. Every single eye on both sides of the encampment was enraptured by the sight. No one spoke. No one breathed.” --William S. Bradshaw

Published by Christian Faith Publishing, William S. Bradshaw’s new book tells the tale of the assassin whose mission was to save a fledgling nation from destruction.

Having arrived late on the scene in Canaan, Israel had to force its way into the Promised Land, taking much of it by force and carving out a difficult, tenuous existence. The kingdom is completely surrounded by brutal enemies. All of which have larger armies, more defensible cities, and more advanced armories. As their enemies close in around them, Israel’s first King, Saul, sinks into a dark, festering depression. He begins to turn a paranoid eye on members of his own household.

To make matters worse, an iron embargo has relegated the Israelites to the Bronze Age while catapulting their enemies into a new military frontier. It is this time that their most ruthless and hated foe, the Philistines, launch an all-out assault on Saul’s capital city in a final bid to crush the Israelites. The Kingdom of Israel is young. Its king is untested, but Saul must find a way to even the odds. He dispatches a merciless assassin, known throughout the region only as the King’s Dagger, to terminate those tipping the scales against Israel. The Dagger can bring Israel’s enemies to their knees, but only if he can first escape his own doom.

View a synopsis of “King’s Dagger: The Loyalist Book 1” on YouTube.

For additional information or inquiries about “King’s Dagger: The Loyalist Book 1”, contact the Christian Faith Publishing media department at 866-554-0919.