Author L.V. Davis’s New Book “Mayor Bulldog Gunny” is the Spellbinding Story of a Young Boy Who Captures the Heart of a Small Texas Town With his Indomitable Spirit

Recent release “Mayor Bulldog Gunny” from Page Publishing author L.V. Davis is the riveting tale of a boy who, though stricken by polio, achieves unimaginable success due to his inner strength and goodness. Ryan Lawrence lost his father in the War yet never lost his spirit, gaining the love and admiration of a community. 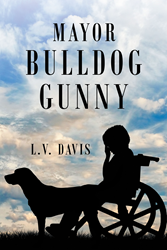 L.V. Davis, a novelist, Vietnam veteran, former officer in the Dallas Police Department, principal owner of a brokerage and investment banking firm, and CEO of a trucking concern before retiring to begin writing full time, has completed his book “Mayor Bulldog Gunny”: an utterly engrossing story of courage, pluck, and determination.

The Mayor Bulldog Gunny is the story of Ryan Lawrence, an eleven-year-old boy who is crippled by polio, and his reclusive mentor, Captain Jeffery Turner. The novel, set in 1952, is about the struggles caused by polio, but more importantly, the success he achieves over his disease. All the nicknames he has are bestowed by the community farmers in his small town in response to his undaunted spirit and the example he sets for them. Captain Turner, who lost his childless wife in an auto accident in the 1930s, is enamored of the boy who becomes the grandchild he never had. He teaches the boy about saving his money, about stocks and investing, about race relations, and the basic goodness in all people, but more succinctly about being an able and responsible human being. In doing so, the captain takes the boy on a two-week-long journey to Mena, Arkansas, to meet a fifty-three-year-old sergeant who had served under the Captain during World War I. Bulldog loved it because his dad had been killed at the end of World War II. Sergeant Grimes, who lost both legs and one arm and who later receives the Medal of Honor that he gives to the boy, is the captain’s way of showing the boy the horrors of war and of showing Bulldog that his handicap is actually minor in the larger human scenario.

Readers who wish to experience this enchanting work can purchase“Mayor Bulldog Gunny” at bookstores everywhere, or online at the Apple iTunes store, Amazon, Google Play, or Barnes and Noble.