Xulon Press Announces the Release of Black Revenge In The White House: The Racist Reign Of The New Elagabalus 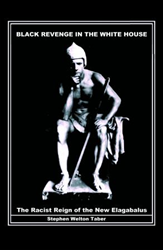 Though claiming to condemn racism, the record of his actions and statements indicates bias against whites

President Trump has been criticized for being a racist, but a new book proposes that another president was guilty of racism.

"Though claiming to condemn racism, the record of his actions and statements indicates bias against whites," the author states. "This book is a day-by-day record of the actions of President Barack Obama. Despite using news sources that supported his agenda, the record reveals his illegal, unconstitutional and racially biased behavior. He is compared to a non-Roman emperor of Rome."

"Democrats praise Barack Obama, but it will be difficult to justify praise when his record is published," Taber says. "For example, he promised to bring races together. The book demonstrates his bias against whites and now race relations are worse than ever before."

Stephen Welton Taber discovered 40 animal species unknown to science, reconstructed the evolutionary history of viruses and insects, and published many articles in peer-reviewed journals in Europe and the United States. His books include Fire Ants; The World of the Harvester Ants; Insects of the Texas Lost Pines; Invertebrates of Central Texas Wetlands; and Plants of Central Texas Wetlands.

Xulon Press, a division of Salem Media Group, is the world's largest Christian self-publisher, with more than 12,000 titles published to date. Retailers may order Black Revenge In The White House through Ingram Book Company and/or Spring Arbor Book Distributors. The book is available online through xulonpress.com/bookstore, amazon.com, and barnesandnoble.com.