Celebrities Choose The Residences at Seafire in the Cayman Islands

The Residences at Seafire, luxury real estate on Grand Cayman’s Seven Mile Beach, is attracting a celebrity clientele including Armie Hammer, Will Smith and Caroline Wozniacki 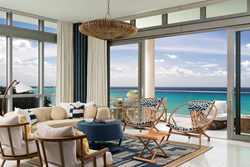 Everything is so well thought out and impeccably planned. It was perfect. It’s much bigger than anything we had there while I was growing up, but at the same time it doesn’t feel obtrusive.

Golden Globe nominated actor Armie Hammer rang in the New Year on Grand Cayman, a first visit to his childhood home in 14 years. He found a different island than the one he had left as a teenager.

“The thing that surprised me the most is how much the island has actually grown. The development, the infrastructure and Seven Mile Beach have changed so much – it is amazing,” said Mr. Hammer.

During his time in the Cayman Islands, Hammer and his family stayed at The Residences at Seafire, a 10-storey luxury residential development located on the internationally acclaimed Seven Mile Beach. The property is the work of Dart Real Estate - a Cayman Islands-based real estate developer specialising in luxury and commercial property.

“I couldn’t believe how great The Residences at Seafire was,” said Mr. Hammer. “Everything is so well thought out and impeccably planned. It was perfect. It’s much bigger than anything we had there while I was growing up, but at the same time it doesn’t feel obtrusive.”

The luxury and privacy afforded at the luxury real estate development on Grand Cayman has attracted several other celebrities to visit, including Will Smith whose Instagram video of him singing “La Bamba” with a local steel pan band on The Nest – Seafire Residences’ private rooftop terrace – was viewed 6.5 million times.

Grand Slam tennis champion Caroline Wozniacki signed on as a brand ambassador for The Residences at Seafire shortly after winning the Australian Open in January, 2018. She will stay there again in April.

“I am thrilled to be partnering with Dart and its properties throughout 2018 and really look forward to spending time in the Cayman Islands in between tournaments. I got the opportunity to stay at The Residences at Seafire during my first visit to Cayman last year and am excited to be able to explore the island further whilst promoting Dart properties worldwide,” said Ms. Wozniacki.

The Residences offer one to five bedroom residences for sale in Grand Cayman with prices starting from US$1.5 million. Owners have access to all the amenities of the adjacent AAA Five Diamond Kimpton Seafire Resort + Spa, as well as a private rooftop terrace curated by celebrity designer Martyn Lawrence Bullard and a private owners’ swimming pool.

ABOUT THE RESIDENCES AT SEAFIRE