Life Lessons of an Immigrant on Education, Sustainability 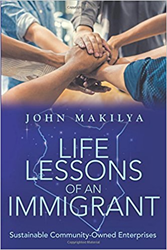 I want to share what I have learned with others, so that we all may benefit.

A native of Kenya, John Makilya of Holbrook, Mass., is an example of how stepping outside of one’s comfort zones can affect great change.

In “Life Lessons of an Immigrant: Sustainable Community-Owned Enterprises,” Makilya offers readers an in-depth look at his experience growing up in Kenya and migrating to the U.S., as well as lessons in sustainable community living and successful enterprise.

“This book not only gives the history of my people in Kenya,” Makilya said, “it provides ingredients of sustainable development projects. I want to share what I have learned with others, so that we all may benefit.”

Before coming to the U.S. in fulfillment of a belief formed during his childhood that “John will go far away,” Makilya enjoyed an equally successful career in Kenya. He served as chair of the board of governors of Misyani Girls School and launched a crusade that the “world discard the myth that the girl-child is less endowed in mathematics and science than her counterpart boy-child and should be empowered through quality education and training.”

In his book, Makilya shares accounts of his work in Kenya, as well as his work as a consultant, making socioeconomic assessments of the World Bank-funded El Nino Emergency Project, as well as his role in the enterprise development component of a USAID COBRA project.

“My life has been far from ordinary,” Makilya said. “If you are curious about the life trajectory of a person with tribal roots coming to live a modern lifestyle, halfway across the globe – look no further.”

About the author
John Makilya was born in Kenya on June 12, 1952. His father brokered the establishment of a Catholic church in the neighborhood of the very antagonistic Protestant Africa Inland Mission. He was also appointed to the District Education Board by the president of the Native Council and spearheaded the expansion of education in his community, irrespective of religious affiliation (Catholic or Protestant). After his college education, John Makilya had a successful career in Kenya; the bulk of it highlighting the idea that designing and installing management, accounting, record-keeping, and financial control system in community-owned enterprises/institutions is the first major ingredient of a profitable and successful project. Additionally, Makilya served as chairman of the board of governors of Misyani Girls School from 1989 to 2005. In this position, he launched a crusade that the world discard the myth that the girl-child is less endowed in mathematics and science than her counterpart boy-child. He relocated with his family to the U.S. in 2005.
To learn more about the author and his book please visit, https://www.archwaypublishing.com/Bookstore/BookDetail.aspx?Book=762260.