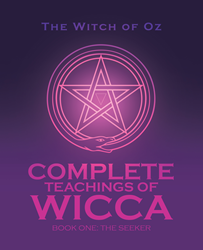 A prominent, Australia-based Wiccan leader and educator has released the first book in an anticipated series, which presents a comprehensive introductory guide to the foundational teachings of the Wicca tradition.

In “Complete Teachings of Wicca Book One: The Seeker,” Lady Tamara Von Forslun, who writes under the moniker “The Witch of Oz,” delivers a gentle introduction to one of the world’s oldest religions and encourages readers to explore their spiritual depths, reflect on the needs of their soul and reawaken and rejuvenate their natural self.

“Through this series, I hope to educate others about this ancient and powerful belief system while also honoring and respecting human differences with tolerance and openness,” Forslun said. “Ultimately, ‘Complete Teachings of Wicca’ shows us how we can awaken the Witch within and become one with each other, nature and the Goddess.”

“What an excellent and easy book to read, found it great for a beginner wanting to know the basics,” a reader wrote in a five-star review of the book through Barnes & Noble’s online bookstore. “I am looking forward to the next book.”

About the author
Lady Tamara Von Forslun, who writes under the moniker “The Witch of Oz,” has studied and practiced the Wicca religion for more than five decades, founded the Church of Wicca in Australia in 1989 and was previously the arch priestess of the Aquarian Tabernacle Church. Forslun has been involved in the Wiccan movement since age 16, is passionate about educating others about Wiccan history, traditions and practices and is in the process of writing and publishing a six-book series about the Wicca religion as well as an autobiography. She currently splits her time between Central Queensland and Perth, Western Australia.