Datalogic, a global leader in the automatic data capture and process automation markets, is pleased to announce the launch of the next generation of industrial computers, featuring the SH15 and SH21 Blackline series. 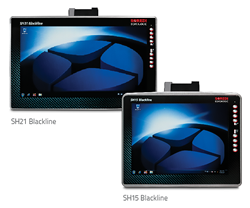 Datalogic, a global leader in the automatic data capture and process automation markets, is pleased to announce the launch of the next generation of industrial computers, featuring the SH15 Blackline™ and SH21 Blackline™ series.

Datalogic entered the market of industrial vehicle mount computers in 2017, thanks to the acquisition of SOREDI Touch Systems GmbH, of Munich (Germany), a global technology leader for industrial computers. After the recent introduction of the Rhino II™ 10” and 12” vehicle mount computers (VMC), setting new standards for ruggedness in the warehouse, Datalogic now extends the industrial computer line to factory shop-floor applications: The SH15 Blackline and SH21 Blackline series are industrial touch screen computers, the perfect solution when rugged and sealed devices are mandatory.

Users working on dust-filled shop floors, rain-soaked LTL docks, and sub-zero food storage operations need real-time information that can be essential for production processes using devices engineered to withstand these wildly varying environmental conditions. If production and warehouse managers don’t have immediate access to information via an industrial computer, automation failure can be extensive and costly. Industrial fixed or vehicle computers are the solution to keep production at maximum efficiency.

Transportation & Logistics operators who work with an SH15 Blackline or SH21 Blackline computer in cold storage or harsh outdoor environments, and those of Manufacturing Shop Floor who follow process and quality controls can count on a choice of the latest Microsoft Operating Systems, empowered by features such as the high resolution color display, the anti-glare multi-touch screen with gloves support, Wired Ethernet (GbE), multiple serial and USB ports for scanners or cameras, along with advanced software tools to create custom software keyboards and manage the connected devices.

Datalogic is a global leader in the automatic data capture and process automation markets, specialized in the designing and production of bar code readers, mobile computers, sensors for detection, measurement and safety, RFID vision and laser marking systems. Datalogic solutions help to increase the efficiency and quality of processes in the Retail, Manufacturing, Transportation & Logistics and Healthcare industries, along the entire value chain. The world's leading players in the four reference industries use Datalogic products, certain of the attention to the customer and of the quality of the products that the Group has been offering for 45 years.

Today Datalogic Group, headquartered in Bologna (Italy), employs approximately 2,900 staff worldwide, distributed in 30 countries, with manufacturing and repair facilities in the USA, Brazil, Italy, Slovakia, Hungary and Vietnam. In 2017 Datalogic had a turnover of 606 million Euro and invested over 55 million Euros in Research & Development, with an asset of more than 1,200 patents and pending patent applications worldwide.