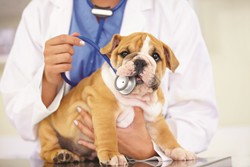 According to Petplan, Lyme disease, a potentially serious infectious disease most commonly spread to pets by the bite of an infected tick, continues to be the top claim for pets in the month of April.

“More veterinarians understand the importance of including Lyme as a rule-out for certain symptoms. Now that the tick habitats are expanding, vets are beginning to realize they should be testing for it. Thus, we’re seeing more positive tests,” says Kim Smyth.

According to Petplan pet insurance claims data, Lyme disease, a potentially serious infectious disease most commonly spread to pets by the bite of an infected tick, continues to be the top claim for pets in the month of April.* In fact, Lyme disease claims have been growing continually at Petplan, rising from $351 for the average cost of treatment in 2011 to $602 in 2017 — an increase of 72 percent in just six years.

While they don’t have the same ranking by severity as Lyme disease, the costs of other tick-borne illnesses, like anaplasmosis, are also on the rise, with average treatment amounts for 2017 coming in at $656 as opposed to $344 in 2011, representing a 91 percent increase.

“The range of Lyme is spreading in the United States — and elsewhere, for that matter,” says Dr. Kim Smyth, DVM, staff veterinarian at Petplan. “Climate change is expanding the range of both the tick that causes Lyme and its reservoir hosts. Additionally, longer falls and earlier springs are extending the seasonality of ticks. Where once we could count on a long period of decreased tick activity in the winter, it's no longer a given.”

And because of this continually increasing tick presence, veterinarians are making testing for Lyme disease a standard part of their protocol.

“More veterinarians understand the importance of including Lyme as a rule-out for certain symptoms. Now that the tick habitats are expanding, vets are beginning to realize they should be testing for it. Thus, we’re seeing more positive tests,” says Smyth.

Symptoms of Lyme disease in pets include fever, loss of appetite, joint stiffness and discomfort, and an overall loss of energy. As the disease progresses, it can become more serious, leading to kidney failure and cardiac or neurological disorders.

It takes as little as 24 to 48 hours for a tick to pass Lyme disease to your pet, so regular maintenance is key to keeping them healthy. A simple blood test can detect Lyme disease in your dog’s body.

Most cases of Lyme disease can be treated with antibiotics, though sometimes, especially in prolonged cases, continual treatment will be needed to relieve symptoms caused by the disease.

Stopping Ticks in Their Tracks

Fortunately, there are simple precautions you can take to help make sure Lyme disease doesn’t suck all the fun out of the season:

In the meantime, rising costs associated with tick-related illnesses are a sign that pet owners might want to seek out pet insurance coverage to help avoid being bitten by a surprise vet bill during outdoor adventures. With a Petplan policy in paw, you can enjoy stress-free confidence that you'll be covered should an unexpected health issue occur.

“Having a pet insurance policy is a good idea, especially as things warm up outdoors,” says Petplan co-founder and co-CEO Natasha Ashton. “It’s good to know that, even if sharp sticks and loose stones or broken bones sideline your curious companion, high vet bills won’t hurt your summer vacation budget.”

*Based on 2015–2017 claims data representing average claim cost divided by number of claims.

ABOUT PETPLAN
Petplan has built an industry-leading pet insurance policy for pet parents who demand a higher pedigree of care for their best friends. We’ve leveraged 40 years of global experience to create completely customizable coverage pet parents can feel confident in, and world-class claims service — 24 hours a day, every day.

Petplan’s innovative approach to pet insurance has been recognized by Forbes, Financial Times, Bloomberg, Inc. magazine, Smart CEO, the Communicator Awards, Ernst & Young and many others.