“Where's Mama? Odessa Brown Toyer, A Woman among Women” from Christian Faith Publishing author Sheryl Marsh offers inspiration for those struggling to overcome poverty and other trying circumstances. Mama Odessa’s story is that of a woman who refused to give into her poverty and dire circumstances. 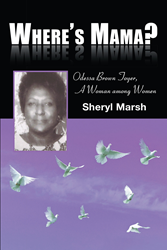 “Where's Mama? Odessa Brown Toyer, A Woman among Women”: the story of a woman whose poverty taught many varied life lessons that live on through her offspring. “Where's Mama? Odessa Brown Toyer, A Woman among Women” is the creation of published author, Sheryl Marsh. Sheryl is an award-winning journalist who retired from the newspaper industry in 2012 to become Communications Director for Morgan County, Alabama. She covered the government entity for fifteen years as a reporter for The Decatur Daily. Her journalism career began in Talladega at The Daily Home where she worked twenty-two years. Born and raised in Talladega, Alabama, Sheryl amassed several Alabama Associated Press and Alabama Press Association awards, including those for Freedom of Information, Community Service, and Investigative Reporting and First Amendment. She also won numerous awards for news features, spot news, and in-depth news projects. In addition, the Epsilon Upsilon Zeta Chapter of Zeta Phi Beta Sorority, Inc. named her as an Outstanding Role Model of the 21st Century of Women in Media Journalism. Alabama One Church-One Child also honored her for her impactful coverage of the state program. As a journalist, Sheryl is best known for uncovering corruption within local government entities. In 2011 she was one of twelve journalists from throughout the United States nominated and chosen to become a Maynard Institute of Journalism Education Fellow through a Donald W. Reynolds fellowship. Maynard Institute was in association with Harvard University’s Nieman Foundation for Journalism.

“I am Odessa’s daughter. I lived through poverty with her and my siblings. That’s why I’m telling her story. I believe this book will help others who have a will to climb out of poverty; and people tasked with caring for elderly loved ones who are victims of Alzheimer’s.” --Sheryl Marsh

Most would consider a woman with a seventh-grade education, eight children to raise, and no money a failure. Not true for one woman who was born in the Deep South in the 1920s. Instead of accepting her fate, she used her circumstances as a ladder, setting goals and stepping over obstacles to successfully break free from the clutches of poverty. As she stared poverty in the face and cleaned the homes of affluent white people for minuscule wages, Odessa B. Toyer demonstrated how one woman of tenacious character, who was totally dependent on God, beat the odds to rear a family that would make her proud and give back to enhance her quality of life.

Odessa B. Toyer did it all without handouts and taught her children to do the same. Mama went against the stereotypical finger-pointing of poverty-stricken families. “Where’s Mama? Odessa Brown Toyer, A Woman among Women” will show that proper raising, not poverty or ethnicity, determines the success of children. Mama’s story is multifaceted with many twists. It shows how Odessa’s adult children chose to forgo life’s pleasures in order to serve and give back to their mother. For more than a decade, her daughters would alternate caregiving for her as she fought the dreaded Alzheimer’s. In the end, she strong-armed Alzheimer’s by refusing to forget her children. After Mama passed, one of her daughters who had cared for her was also stricken by Alzheimer’s and was provided care from her sister.

View a synopsis of “Where's Mama? Odessa Brown Toyer, A Woman among Women” on YouTube.

For additional information or inquiries about “Where's Mama? Odessa Brown Toyer, A Woman among Women”, contact the Christian Faith Publishing media department at 866-554-0919.