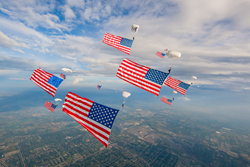 March Field turns 100 in 2018 and an amazing show is planned for the celebration. The two day airshow is free to the public, April 7th and 8th. According to the event site, gates open at 8 a.m. each day, flying starts at 11 and the show ends following the USAF Thunderbirds’ performance at 4 p.m.

“This is the perfect venue for our special 10 American flag patriotic performance,” said Team Fastrax™ founder John Hart. “The March Field Air & Space Expo is a wonderful family friendly aviation celebration, and we’re thrilled to be a part of it. What better way to say Happy Anniversary.”