COL (Ret) John W. Smith’s Newly Released “Wounded Eagle: The Politically Correct Seduction of the Law in Kentucky” is a Must-read About a Sexual Harassment Investigation

“Wounded Eagle: The Politically Correct Seduction of the Law in Kentucky” from Christian Faith Publishing author COL (Ret) John W. Smith is an interesting read that describes the experiences, legal processes, and outcomes that have affected a group associated with a sexual harassment investigation in 2013. 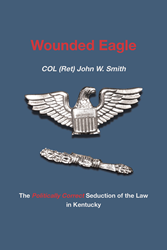 Smith shares, “All these brief indications are to acquaint you with the life I led before becoming involved with Bluegrass ChalleNGe Academy in 2001. I grew up expecting to always do the right thing and expecting to work hard to achieve meaningful goals in life. God has always been there for me and has blessed every part of my life. There were times in my youth that I did not recognize this. Why did an accident have to happen that impacted every aspect of my development and participation? Was the early recognition of what might happen if I became intoxicated with my partial dentures the reason I chose not to drink with my peers? Did my father really drink enough for both of us when I was growing up? Why did God place me on a farm so far from school and town that attending practice became prohibitive? As I have grown older, and hopefully wiser, I recognize that God has used everything for my good. Our struggles are what make us strong and allow us to persevere in the face of hardships.”

Published by Christian Faith Publishing, COL (Ret) John W. Smith’s new book is a laudable journal that warns people about the possibility of good and innocent people being convicted if inconsistencies in the justice system is not reexamined and reevaluated.

It also further presents the legal process that has led to the charging and prosecution of six staff members of a Kentucky-At-Risk Youth program.

View a synopsis of “Wounded Eagle: The Politically Correct Seduction of the Law in Kentucky” on YouTube.

Consumers can purchase “Wounded Eagle: The Politically Correct Seduction of the Law in Kentucky” at traditional brick & mortar bookstores, or online at Amazon.com, Apple iTunes store, or Barnes and Noble.

For additional information or inquiries about “Wounded Eagle: The Politically Correct Seduction of the Law in Kentucky”, contact the Christian Faith Publishing media department at 866-554-0919.