The sounds of bagpipes and Celtic music will fill the air May 11–13, 2018, as the 32nd Annual Texas Scottish Festival & Highland Games celebrate their new home at the Wise County Fairgrounds in Decatur, Texas. 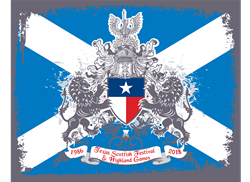 Everyone is a wee bit Scottish at the Texas Scottish Festival

A spectator favorite, Pro-Scottish athletics that include the Caber Toss, Hammer Throw, Weight Throw, Weight Toss, Sheaf Toss and Putting the Stone, will be featured throughout the weekend. Scottish delicacies such as meat pies, haggis and sausage rolls, as well as fish and chips will be just a part of the culinary delights featured in the food court. Vendors offering a myriad of Scots and Celtic wares will also be available.

Long-time favorites on the Celtic rock scene are in the lineup this year including, Seven Nations, Brother Angus, Scotland Rising, The Selkie Girls, Cleghorn, Tullamore, Jil Chambless and Scooter Muse, Seamus Stout, Beyond the Pale, Reel Treble & More. Traditional pipes and drums will be provided by the Fort Worth Scottish Pipes and Drums and North Texas Caledonian Pipes and Drums.

We find everyone is a wee bit Scottish at the Texas Scottish Festival and it is a festival for ALL ages. Nessie’s Nook Children’s area has live music, children highland games, crafts, face painting, bounce house, tea party, and a treasure hunt. Lots to do for little ones of all ages.

Hours of operation this year will be 5 pm – midnight on Friday; 9 am – midnight Saturday; and 9 am – 6 pm on Sunday. Additional information regarding volunteer opportunities, and admission can be found at the Texas Scottish Festival website and social media sites, http://www.texasscots.com, Facebook, Twitter & Instagram. #TexasScottishFestival #TexasScots