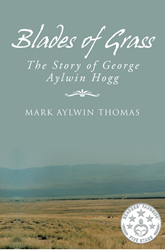 "Any book that convinces me that maybe there is still hope in the world…that is worth the writing and the reading and the time.” – The Bookbag UK Review

British adventurer George Aylwin Hogg, was a remarkable man best known for his heroic deeds and accomplishments in late 30’s and early 40’s China where he helped save and train 60 orphan Chinese boys. As the nephew of Hogg, author Mark Aylwin Thomas was bestowed his uncle’s collection of letters and writings which he explored through, and now offers a personal and compelling window into the character of this extraordinary man in his new book, “Blades of Grass – The Story of George Aylwin Hogg.”

Although Hogg’s life was short, he was a caring and brave man who is well-known in China for his numerous acts of kindness. The memory of what he did for Chinese people during the war-torn years of the 30’s and 40’s is still celebrated and held to a high esteem in China. Also, a hero in the United Kingdom, Hogg’s original letters are in safe-keeping at the illustrious Bodleian Library archives in Oxford.

Hogg’s story has been portrayed in the feature film The Children of Huang Shi and in several other books, however, “Blades of Grass” is the most accurate and enthralling account of his life as told through his own words and supported by Thomas’ research and insight.

A five-star reviewed book on Reader’s Favorite, “Blades of Grass” has already been receiving critical acclaim.

“Blades of Grass is an in-depth and well-researched homage to George Aylwin Hogg’s vision for a democratically industrialized China.” – Clarion Review

A touching tribute to a heroic man, “Blades of Grass” will captivate and inform readers of an important part of world history that is not to be forgotten. To learn more, please visit GeorgeAlywinHogg.com.

About the author
In 1946, about six months after the tragically early death of his uncle George Aylwin Hogg, author Mark Aylwin Thomas was born and raised in Sheffield. In 1974, he moved to Finland with his Finnish wife Helena. Living in the midst of lakes and forests, near the town of Suonenjoki, Thomas set to making a life as a farmer. As a sideline, he provided a translation and copy editing service to the region’s industrial and scientific community. Thomas’ unusual middle name, Aylwin, which he shares with his uncle, is of ancient Celtic origin, and it was by this name that his uncle was known within the family. In 1988, the Chinese government invited members of Hogg’s family to attend memorial events in China. During his trip, Thomas was asked if he would return later in the year to act the role of his uncle in a mini-series for Chinese television. While in China, Thomas became fascinated by the story of his uncle and came to realize to what extent he was regarded in China as a national hero yet was virtually unknown in his own country. Hogg’s sister, Rosemary, passed all of her brother’s papers to Thomas for safekeeping and research for his book. Working on it during the winter months, while his strawberry fields were deep under snow, and arctic weather kept him indoors, his book “Blades of Grass: The Story of George Aylwin Hogg” took shape.