From Best Feature to finalists for Best Script, the Artemis Women In Action Film Festival announces the fourth edition winners. Final Draft®, the award-winning screenwriting software, will award the top five writing finalists with their products. 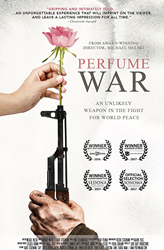 With films about women overcoming great odds, saving lives, stopping wars, and other socially relevant themes, every film in the festival, ranging from dramas to documentaries offers their audiences something unique and engaging.

What seemed like an impossible task, the Artemis Women In Action Film Festival (AWIFF) has chosen the winners from its staggering number of entries this year. Filmmakers who featured strong female characters entered this cause célèbre from around the world, an increasing record for the fast-rising festival, geared to honor female action and empowerment heroes to movie enthusiasts everywhere. With films about women overcoming great odds, saving lives, stopping wars, and other socially relevant themes, every film in the festival, ranging from dramas to documentaries offers their audiences something unique and engaging.

“This year, we received submissions from 35 countries. It was a daunting task to pick 2018 Official Selections because the quality of films this year was so stunning across all our submissions. We are incredibly proud and excited to offer this edition. And we are thrilled to recognize this year’s film and screenplay competition winners. They truly earned and deserve that recognition.” –Melanie Wise, Artemis Director

“We are honored to have Final Draft support our screenplay competition with prizes. It’s fantastic to be able to offer our winners the top screenwriting software available. .” –Melanie Wise

Visit the winners page on the AWIFF website: http://www.artemisfilmfestival.com/2018-festival/2018-schedule/2018-winners.
For a schedule of events, including screenings and the opening night awards gala, visit http://www.artemisfilmfestival.com/2018-festival/2018-schedule/. AWIFF will screen approximately 70 films, all dedicated to women in action, beginning April 26th through April 29th.

About Final Draft, a Cast & Crew Company:
Final Draft, a Cast & Crew Company, has published Final Draft® software – the number-one selling screenwriting application in the world – for 25 years. Final Draft automatically paginates and formats your script to industry standards, allowing writers to focus on what they do best – writing scripts. Used by such industry giants as J.J. Abrams, James Cameron, and Aaron Sorkin, Final Draft software is the professional’s choice and the entertainment industry standard. In addition to its flagship software product, Final Draft offers the annual Big Break Contest – a screenwriting competition that launches careers, and awards over $80,000 in cash and prizes. Final Draft also offers the Reader® and Writer® apps for iPhone and iPad, making creativity truly portable. To learn more about Final Draft and its products and services, visit: http://www.finaldraft.com