Knife-Sharpening Robot from ReSharp Gets It Right First Time, Every Time 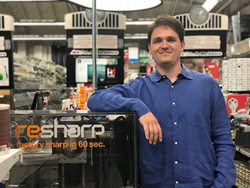 Jim Kolchin with his ReSharp machine.

“I've learned a lot. From computer vision basics, to electrical engineering, to realizing how hard a product design really is. Ultimately I learned how important it is to create something that people want.”

It’s the American dream: One day, you’re living in Russia. Another day, not so many days later, you’re selling knife-sharpening robots as the head of a new company following a successful crowdfunding campaign. That’s the true story of Dmitriy “Jim” Kolchin, who came to the United States at the age of 20 with just $200 in his pocket. Today he is the married father of a son and “future president” named Elvis. He’s also the man behind ReSharp Knife Sharpening, which manufactures machines that automate the sharpening of blades. Right now, Kolchin is working on the “G2” version of his machine. The “G1” resides in an Ace Hardware store in Palo Alto, California. The machine designated G0, of course, was his prototype.

Kolchin’s knife-sharpening robot will restore your knife’s edge in just a minute. The device scans the edge, grinds it, and produces a cutting blade free of burrs created through the precision of technology. Knife sharpening by hand has always been as much art as science. Through the years, a number of companies have tried, sold, and continue to sell edge-sharpening guides, knife sharpening gadgets with pre-set angles, and other aids intended to make the knife sharpening process more repeatable and precise. These efforts have met with varying levels of success, some of them wholly unsatisfactory. Kolchin’s ReSharp does away with all that and produces beautifully and precisely ground edges, easily and efficiently, every single time.

After starting several other businesses, Kolchin turned to crowdfunding to get the initial financing for his knife sharpener. He was immensely successful, raising $120,000 for his original http://www.kniferobot.com prototype. He then began working with Angel Investor Dave Lyons, whom he describes as his mentor. Together, the pair created ReSharp.

A lifelong knife owner, Kolchin has carried a pocketknife since he was just seven years old. He was raised to believe that a knife must be kept sharp, but he grew tired of the routine and sought a way to automate the process. In the course of doing so he faced -- and surmounted -- multiple challenges.

“I've learned a lot,” he explains. “From computer vision basics, to electrical engineering, to realizing
how hard a product design really is. Ultimately I learned how important it is to create something that people want.”

ReSharp is not for sale to individual customers. Rather, Kolchin partners with hardware stores, grocery stores, and other retail locations to make the machine available to individual consumers. Much like automated key duplication machines have sped up the process of grinding keys by hand at your local hardware store, Kolchin’s employee-operated ReSharp can sit quietly at a retail location and sharpen blades swiftly and accurately whenever called on. It should prove to be of great benefit to those in industries where sharp knives are vital to food preparation, but also to those who sharpen knives for a living -- speeding up their work while increasing their capacity.

“If a kitchen chef, knife sharpener, or other individual knife owner is reading this,” Kolchin adds, “I want them to join the sharp knife movement. Go to the store that has a ReSharp machine and have that store’s employees sharpen your knives every three months.”

There is no fee to host one of Kolchin’s robots. Rather, ReSharp loans the machine for free, maintaining it and splitting the revenue from it with the host store. If you own a retail location and would like to host a ReSharp robot of your own, contact Kolchin at http://www.resharp.com to make arrangements.