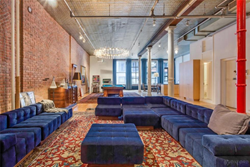 “Alex & Jennifer's Park Avenue Apartment”
Jennifer Lopez and Alex Rodriguez have gone all in paying $15.3 million for a new apartment at New York's 432 Park Avenue. The three-bedroom, half-floor residence with big Central Park views is in the city's latest hot spot setting record sales with its penthouses selling for $91 million and $60 million and many of the lower floors selling at about $20 million.

“Eva's Hollywood Homes”
Eva Longoria is asking $3.795 million for her 8,603-square-foot Hollywood home that she bought in 2006 for $3.6 million. The home features six bedrooms on three floors, circular stairway, elaborate courtyard, outdoor kitchen, pool and spa. Eva is also hoping to get $14 million for a home in the Hollywood Hills that she bought in 2015 from Tom Cruise for $11.4 million. The Texas-born 'Desperate Housewives' and 'Devious Maids' star is expecting her first child in May.

“Tiger's Ex Selling Florida Beach Mansion”
Tiger Wood's ex-wife, Elin Nordegren, is selling her North Palm Beach home listed at $49.5 million. The 25,000-square-foot home was built in 2014, a few years after her $100 million divorce from Tiger, with 11 bedrooms and two floor-to-ceiling glass walls that fold open to bring in the ocean breezes.

“Harvey Weinstein Unloads More Real Estate”
Disgraced movie mogul Harvey Weinstein has been rapidly selling his real estate holdings following the recent headline sex abuse allegations against him and his bankruptcy. Earlier this year, Weinstein took a $1.4 million loss on his home in the Hamptons he unloaded for $10 million and sold two waterfront properties in Westport, Connecticut for $16 million. He just sold his Greenwich Village home for $25.6 million which he bought in 2006 for $14.95 million.

“Top 10 Expensive Countries”
No surprise that the top ten most expensive countries in the world have either the best beaches, the highest heating bills or they have so much money from oil that the only housing available is on the order of a palace. So people looking for another country and since shopping is so much cheaper in the U.S., be sure to stock up on bikinis, plenty of quilted down outerwear or bejeweled caftans. Anyone thinking of moving to Bermuda, Norway or Qatar, be sure to bring a fat wallet as it's going to cost up to 97% more than the U.S.