HomeSmart's real estate-themed Sticker App is available for download from the App Store and Google Play. 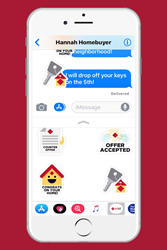 These text messaging stickers provide a fun way for agents to connect with home buyers and sellers throughout the transaction so that those interactions become more engaging. -- HomeSmart CIO Todd Sumney

HomeSmart International has released text messaging stickers, available for iPhone and Android users, that adds real estate-themed icons to your smartphone keyboard. The colorful and inviting graphics create a simple and effective way of engaging clients through a means of communication consumers increasingly use as their primary channel for communication.

The NAR Real Estate in a Digital Age 2017 Report published that nine out of 10 REALTORS® contact their clients via text message. Other sources state, text messaging is the most used data service in the world and, on average, Americans send text messages twice as much as they make phone calls.

“HomeSmart has been tech-forward since its founding in 2000," said HomeSmart Chief Industry Officer Todd Sumney. "The technology and tools we build are focused on increasing agent productivity. These text messaging stickers provide a fun way for agents to connect with home buyers and sellers throughout the transaction so that those interactions become more engaging.”

HomeSmart Stickers is a downloadable app from the App Store and Google Play that provides an emoji platform catered directly to real estate agents and their clients. Whether agents are increasing their sphere of influence or giving transaction updates to current buyers and sellers, HomeSmart Stickers offers a unique way to stay current amidst the constant stream of technology.

“We wanted to create an original way for agents to communicate with their prospective and current clients,” said HomeSmart Chief Marketing and Innovation Officer Matt Hensler. “Like all of our productivity-enhancing technologies, we’ve made this tool available to HomeSmart agents at no cost. In fact, agents from any brokerage can readily download and use them in their next client interaction.”

Download HomeSmart Stickers from the App Store or get it on Google Play.