Author Sandy’s new book “Visions, Truths, and Inspirations: A Life’s Journey with Bipolar Disorder” is a deeply personal reflection on a life plagued by mental illness.

Recent release “Visions, Truths, and Inspirations: A Life’s Journey with Bipolar Disorder” from Page Publishing author Sandy is a candid memoir of perseverance through a series of abusive relationships, single motherhood, and the intense challenges of living with mental illness until receiving the correct diagnosis and treatment. 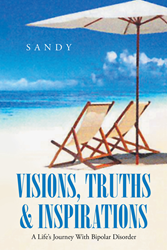 Sandy, a resident of Minneapolis, Minnesota, has completed her book “Visions, Truths, and Inspirations: A Life’s Journey with Bipolar Disorder”: a moving journal of determination, despair, and triumph over the obstacles of a difficult life.

Mental illness should not be taken for granted or shunned. Life itself is a realistically painful journey without having the added burden of having to live it with an illness that still holds a stigma. Together with verses written during times of either side of the poles of bipolar disorder, Sandy tells of her experiences with family members as well as those with whom she came into contact. All this time trying to reach a level of a clear understanding of her own disorder, one which is also called an illness. Sandy’s trust was often misplaced and drove her to relationship after relationship of abuse and rejection, including a rape by someone she believed would never hurt her. The faith she had in God brought her to an acceptance that her life was not only difficult to define but mostly one that was difficult to endure. However, she never gave up.

Published by New York City-based Page Publishing, Sandy’s book offers a window into the life and mind of a single mother suffering from bipolar disorder.

Readers who wish to experience this engrossing work can purchase“Visions, Truths, and Inspirations: A Life’s Journey with Bipolar Disorder” at bookstores everywhere, or online at the Apple iTunes store, Amazon, Google Play, or Barnes and Noble.