Author Robert A. Gorman II’s New Book “Massiah’s Trip” is a Suspenseful Story of Mysterious and Supernatural Events and their Effects on a Group of High School Friends

Recent release “Massiah’s Trip”, from Page Publishing author Robert A. Gorman II, is a fast-paced and wickedly funny tale full of action, suspense, and romance during a high school reunion weekend for Billy Trigger and his old friends. 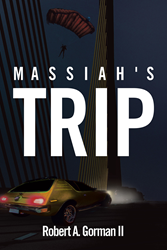 Robert A. Gorman II, a native Floridian and US Marine veteran who served in Operation Desert Strom, has completed his book “Massiah’s Trip”, a page-turning killer comedy set in the beautiful Gulf coast of Florida.

“Massiah’s Trip” is centered around a group of high school friends reunited after many years. After driving for hours through a horrendous thunderstorm, Billy has injured the palms of his hands from the white-knuckle driving he was doing. Because of the violent lightning flickering across the sky, a focused Billy has not realized that his fingernails were digging into at the palms of his hands, causing them to bleed. Hours later, he finally makes it home to Clearwater Beach. Billy and Chaz meet up with Dick at his house for a welcome home party. However, after the party on the way home, Billy and Chaz are mixed up in a fatal accident during which Billy also meets the girl of his dreams. A beautiful girl named Jade, who is quite mysterious herself. Following that tragic event, more mysterious murders and tragic deaths seem to happen around Billy and his car. Billy feels he is going out of his mind because he has a conversation with a ghost. Or does he?

“Massiah’s Trip” also includes skydiving and a famous bridge with a dark past that could hold the key to Billy’s salvation. When Billy finds out the haunting secret of his ’76 AMC Gremlin, he races around the clock to come up with a plan to stop all of the carnage and madness that Massiah is wielding. So, with one last epic party, Billy, Chaz, and Dick get ready for the ride of their lives. They have one chance to beat the evil force because if they fail, they’re dead!

Published by New York City-based Page Publishing, this book takes place in Pinellas County and highlights places in Largo and Clearwater Beach. Also, it includes the Sunshine Skyway Bridge, with its tragic story that claimed the lives of many unsuspecting people that foggy morning. Get ready to enjoy a clever little story of killer comedy, suspense, and romance as “Massiah’s Trip” takes readers on a ride through a highway of hell.

Readers who wish to experience this riveting work can purchase “Massiah’s Trip” at bookstores everywhere, or online at the Apple iTunes store, Amazon, Google Play, or Barnes and Noble.

Page Publishing is a traditional New York-based full-service publishing house that handles all the intricacies involved in publishing its authors’ books, including distribution in the world’s largest retail outlets and royalty generation. Page Publishing knows that authors need to be free to create – not bogged down with logistics like eBook conversion, establishing wholesale accounts, insurance, shipping, taxes, and the like. Its roster of accomplished authors and publishing professionals allows writers to leave behind these complex and time-consuming issues to focus on their passion: writing and creating. Learn more at http://www.pagepublishing.com.