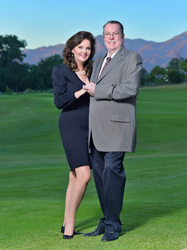 James M. Irvine spent 14 years (1978-1992) involved in Broadcast Network Television and was the Founder and President of Orange Coast Video which was a successful network television mobile facilities company for high end, high demand, live network television productions. His clients included: ABC, NBC, CBS Sports, Summer Olympics 1984, Boxing, Academy Awards, Golden Globe Awards, Emmy Awards and the Rose Parade to name a few. He also was an active partner in a 41-acre winery in Napa Valley California, that produced over 30,000 cases of award winning wines. Because of his fascination with trains, he was an active partner in the Arizona and California Railroad. Currently he is a business man and real estate investor.

Susan R. Jeske is the daughter of the late Charles and Denise Jeske of Littleton, Colorado. She was crowned Ms. America® 1997 at the Luxor Hotel in Las Vegas winning $75,000 in cash and prizes. Some of her other titles include: Miss Orange County 1987, Miss Brea/Fullerton 1986 and Ms. California State 1996. In 1999 she purchased the Ms. America® Pageant and became its CEO. Since then she has grown the pageant into an institution that attracts high-achieving women from all walks of life to vie for the title and put it to philanthropic use. In 1993, Jeske set the still unbroken World Record, published in the Guinness Book of Records, for singing the National Anthem at the most events in a 24-hour period. She has sung all over the world and for 7 United States Presidents. In 2004, Susan was honored with the Presidential Service Lifetime Achievement Award from the President of the United States for her lifetime contributions to charity and volunteerism. Throughout her career she has been a spokesperson for several Fortune 500 companies including Hyundai Motor America and traveled worldwide to launch a natural skin care line called True Elements for Nikken International.

The couple plans to marry at the Irvine Ranch Historic Park (Jamboree Road and Irvine Boulevard) which is where the original Irvine family home was and is now the Katie Wheeler Library (named after James’s Aunt). James was born and raised in the home as a young boy. He will be the last Irvine that lived in the mansion, who will be married there. The park is part of the OC Parks family of historic parks and is the original headquarters of the Irvine Ranch started by James Irvine II. The 16-acre property was donated by The Irvine Company to the County of Orange and made into a historic park for all to enjoy. In 2015, six of the historic structures were restored and a dedication ceremony was held with the Irvine family members present.

James Myford Irvine is the only descendent that still carries the first name James and the last name Irvine - James Irvine.

A fun day on Halloween at Disneyland - The Beauty and the Beast.