“An Eastern Perspective On The Word” from Christian Faith Publishing author Charles Busby helps modern students of the Bible understand the true meaning of God’s Words. By interpreting the Bible from the ancient, Middle Eastern perspectives, the true Word of God is revealed. 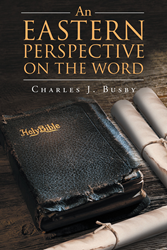 “An Eastern Perspective On The Word”: an examination of the Holy Bible from the ancient, Middle Eastern perspective of those who wrote it. “An Eastern Perspective On The Word” is the creation of published author, Charles Busby. Charles grew up attending a fundamental Baptist Church. He earned an AA and BA in religious education. He served as the chaplain, registrar, and teacher for the Messianic School of Theology from 1974 to 1979. He was the Executive Vice President of the school from 1985 to 1989. He taught college courses in Bible manners and customs, professional ethics and public speaking. Charles also had a secular career in transportation and logistics. His career included twenty-three years with a Fortune 200 company where he was a national sales representative for clients in Mexico and along both coasts of the United States. In 2012, he went to work as a regional marketing manager for J. B. Hunt. Charles retired in 2014 and currently lives in Powder Springs, Georgia. He attends Pickett’s Mill Baptist Church in Dallas, Georgia.

“Please allow me to use an example to make my point. The famous painting by Leonardo da Vinci named The Lord’s Supper is one of the world’s most famous and recognized paintings. The Lord’s Supper is depicted by da Vinci as thirteen men (the Lord Jesus and his twelve disciples) around a long table. I believe that a copy of this painting probably hangs in more homes than any other picture ever painted. However, a Bible School student that has taken Biblical Manners and Customs will tell you that these people during this time and in that culture always took their meals while sitting on cushions, pallets, or mats upon the floor. The participants to the meals would gather in a circle so as to be able to face each other. The bread, meat, and other food items would be placed in the middle of those dining so that all could reach into the bowls and dip their bread or sop out of the bowls. Leonardo da Vinci was not aware of the difference in dining customs. Therefore, it is very understandable why he portrayed the event of the Lord taking that meal while sitting at a table. That was the way that his culture took its meals. However, da Vinci was still wrong and did not correctly represent or depict what the event actually looked like. Does this make him bad or evil? No, of course not! But he misrepresented the event and how the meal was actually observed by the Savior.” --Charles Busby

Published by Christian Faith Publishing, Charles Busby’s new book reveals the true meaning of the Scripture. The Holy Bible was written by the Holy Spirit via the hands of ancient Middle Eastern men. The accounts and events that are recorded in the Bible are told through the eyes of ancient writers. The laws, traditions, practices, and customs of their time had a very significant impact on the images and message that each writer expressed. Each Biblical writer assumed that all future readers of their words would understand their writings through the same cultural lens. Christianity is, however, now preached and taught primarily from a modern, Western perspective.

Modern, Western men and women do not understand nor share the same laws, traditions, customs, and practices as the ancient Middle Eastern persons who the Lord used to record His Word. Most of today’s Christians have little knowledge of these cultural differences. The persons and events recorded in the Holy Bible are, therefore, frequently misunderstood and misrepresented. An Eastern Perspective On The Word” helps correct the cultural misunderstandings of modern Christian by explaining the cultural lenses of those who wrote the Bible.

View a synopsis of “An Eastern Perspective On The Word” on YouTube.

Consumers can purchase “An Eastern Perspective On The Word” at traditional brick & mortar bookstores, or online at Amazon.com, Apple iTunes store, or Barnes and Noble.

For additional information or inquiries about “An Eastern Perspective On The Word”, contact the Christian Faith Publishing media department at 866-554-0919.