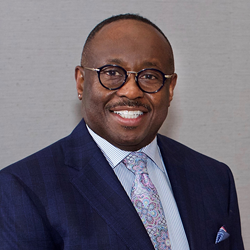 Cornish College of the Arts’ Board of Trustees announced today the selection of Raymond Tymas-Jones as president following a year-long search. Tymas-Jones, whose appointment will begin July 1, 2018, comes to Cornish with a deep background in both the arts and academia. He will be Cornish’s first African-American president.

“I am extremely honored to have the opportunity to join the Cornish College of the Arts’ community as its next President. The legacy of Cornish College as a progressive institution, dedicated to preparing artists to fully participate in society as citizens of innovation and creativity, continues. My goal is to ensure that Cornish’s faculty, staff, and students thrive and excel as artists, innovators, and creatives for the express purpose of impacting the artistic and cultural communities of Seattle and beyond,” said Tymas-Jones.

Tymas-Jones served as dean of the College of Fine Arts at the University of Utah for 12 years and became the university’s associate vice president for the arts in 2017. During his tenure, he established the Center for Interdisciplinary Arts in Technology and led the development of the Create CONNECTIONS Project to foster interdisciplinary activity through the infusion of arts and design practices in medicine, science, and business. He joins Cornish, a century-old performing and visual arts college located in the vibrant tech hub of downtown Seattle, as the Board of Trustees concludes a multimillion dollar real estate deal that provides opportunities for innovative multi-disciplinary spaces.

“Raymond Tymas-Jones is uniquely qualified to lead Cornish as it welcomes the opportunities of the next century as a crucible for the arts in the Seattle community, the nation, and beyond. His energy, enthusiasm and passion for the arts perfectly match the vision of the College’s founder, Nellie Cornish, to educate creative citizen innovators to thrive as artists and leaders in communities such as business, science, and healthcare, that need their skills now more than ever,” said Lawrence Hard, Cornish’s board chair.

In addition to his responsibilities in the College of Fine Arts, Tymas-Jones also was the Chief Administrative Officer for the Utah Museum of Fine Arts, the Pioneer Theatre Company, the Tanner Dance Program, and UtahPresents Performing Arts Series. Prior to his current position at University of Utah, Tymas-Jones served as the Associate Dean of the Faculty of Humanities and Fine Arts at Buffalo State College (1990-93), Director of the School of Music at the University of Northern Iowa in Cedar Falls (1993-98) and the Dean of the College of Fine Arts at Ohio University (1998-2005).

His community service was recognized by the 2014 Cultural Achievement Award for significant contribution to the arts in Utah. Tymas-Jones was a member of the Utah Arts Council Board, Ballet West Board of Directors, and the Ohio Arts Council as well as President of the International Council of Fine Arts Deans (2011-2013). Throughout his academic career, he has worked to increase the diversity of faculty and curricular offerings.

“Cornish College of the Arts was built on the shoulders of bold, forward-thinking innovators. Raymond Tymas-Jones has the boldness necessary to position us as the leading performing and visual arts college of the 21st century,” said Sharon Cornish-Martin, a Cornish Trustee and Chair of the presidential search committee.

About Cornish College of the Arts

Cornish College of the Arts offers Bachelor of Fine Arts degrees in Art, Dance, Design, Film, Interior Architecture, Performance Production and Theater and,a Bachelor of Music degree. The College is accredited by the Northwest Commission on Colleges and Universities, and the National Association of Schools of Art and Design.