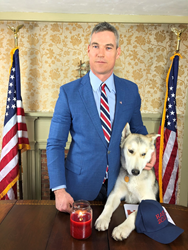 The progress we are making in renewables is not fast enough. How many acres must burn before we wake up?

The Thomas Fire is the seventh largest wildfire that the state of California has ever seen. It’s destroyed countless homes, farmlands, and businesses while burning for over a month straight. This fire has disastrous implications for the economy, environment, and citizens of California. Presidential candidate, Hart Cunningham, is asking the tough questions around this event in his new YouTube video.

For example, why hasn’t there been an official statement from President Trump tying this event to the true source of the problem, climate change? California Governor Jerry Brown stated that the scale of wildfires hitting the state should be a wake-up call for people to respond to climate change. He, like Hart Cunningham, is concerned that these fires are just an indication of an increasingly dire trend of more destructive weather patterns.

How long is the United States government going to ignore the overwhelming evidence and consensus among scientists? Global warming is expanding, was created by humans, and real actions must be taken to minimize the effects it has on current and future generations. As more and more natural disasters occur across the States, it becomes even more apparent that major initiatives are needed, and that they should be led by a leader who cares about our planet.

In 2020, the American people will finally have the option to elect someone who does care about this topic and isn’t afraid to speak the truth, Hart Cunningham. In a recent video he released on his YouTube channel, he states, “We are under-equipped for this attack. I’ve lived in every major city of California and I have a large company in Sacramento. We need to take this issue much more seriously. Climate change must be stopped. Fossil fuel burning must end. The progress we are making in renewables is not fast enough. How many acres must burn before we wake up?”

His plan in 2020 is to move completely away from fossil fuel energy and to adopt fully renewable sources of energy in a way that works for everyone. It’s time to stop making political decisions based on greed, but to start making them based on the betterment of mankind and the planet. Watch his video to learn more about what you can expect regarding climate change from a Cunningham presidency.

It’s not only Cunningham that believes that the Thomas Fire has reached this level of severity due to global warming and climate change. Scientists agree that human-caused climate change is increasing the size and frequency of large wildfires, especially in heavily wooded areas. Fires are much easier to start, as well as spread, in the hot and dry wooded areas caused by droughts.

Fortunately, there are still things that can be done to temper the effects of wildfires and to help prevent them. As Cunningham has discussed, the state of California was not prepared to deal with the scale of this disaster. There need to be more firefighters available, as well as more planning around what should be done when this occurs, to get in front of it as much as possible and mitigate the amount of devastation. A short-term plan that includes those strategies, along with a long-term plan that accounts for addressing climate change, is crucial to prepare for future events like the Thomas Fire.