The First Amendment is Under Attack: Hart Cunningham Weighs in On the Importance of Protecting Freedom of Speech 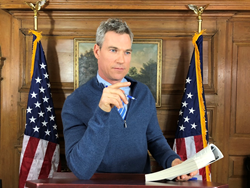 Hart Cunningham released a new video describing the recent threat to The United States Constitutional First Amendment and calling on citizens to act. The threat he describes stems from the controversial list of words that President Donald Trump’s administration has asked the U.S. Centers for Disease Control and Prevention (CDC) to avoid in their 2019 budget request. This list of words includes terms such as evidenced-based, fetus, science-based, transgender and vulnerable.

Many American’s are outraged by this news as it seems to be a direct attack on scientific integrity, and an attempt to diminish the advice and expertise of scientists. Presidents and government should not be allowed to control or manipulate the rhetoric and language that is used to talk about crucial issues such as climate change and health. As president, Hart Cunningham would never take measures to ban any language, but would instead work with the great minds of the world to make it a better place.

Cunningham's beliefs on the issue are clear:

“No doubt about it, the white house administration is determining which language can be used for the description of diseases, poverty, transportation, energy, and healthcare. This is the most blatant violation of our constitution that we have seen in the last five decades…when are we going to wake up? We must fight this. We must speak.”

In many of his videos explaining the policies that he will put into place as president, Cunningham describes the importance of transparency of information. Why is this important? It’s vital because broad-scale research projects live or die based on funding decisions like the tax budget request that the CDC is currently working on. Scientists are extremely likely to take the recommendation of the government when it comes to using or not using words that will get their funding approved, and the language they use is documented, referenced and stored forever. Words are very powerful and should not be censored.

Hart Cunningham invites every American citizen that is concerned for their constitutional rights to join in him in building a more secure, humane, and sustainable future. He says, “We must have transparency of information so that we can have transparency of action.” Through his YouTube channel and his website, he is completely forthcoming about what he will focus on as President in 2020 and throughout his two terms. He has plans to end poverty, increase equality, improve women’s rights and so much more.