Recent release “SHILOH 1ST Day: Turning Point of the American Civil War” from Page Publishing author Charles Sprinkles is a captivating book that analyzes the events that led to the happening of the war, and the missteps of those in power. 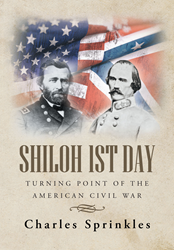 Charles Sprinkles, a former US Army infantry officer with a double master’s degree in military history/American Civil War studies and global history/Eastern studies, and a member of many Civil War clubs and the Knights Templar/Shriners organization, has completed his new book “SHILOH 1ST Day: Turning Point of the American Civil War”: an immersing account highlighting the blunders of three great generals—Grant, Sherman, and Beauregard—during the battle of Shiloh, where over ten thousand men perished.

Author Sprinkles sheds a path breaking light on how the high-tier officers mishandle their ranks due to rash judgments: “Davis would reject this plan and explained the problems with this plan. It is plane to see the flaws of this plan; any young officer could spell it out to you. That Beauregard would come up with such a plan amazes me. This should have been a red light to Davis about Beauregard. If he was going to come up with such a moronic plan, what would he do in future campaign’s during the war—can you say, Shiloh! The Napoleon battle strategy was a thing of the past. Yet both the Union and Confederate armies would continue to use them. This would cost many of men to lose their lives for no reason. This would change later in the war.”

Published by New York City-based Page Publishing, Charles Sprinkles’s consuming tale rouses a controversial perspective to the study of the American Civil War that the readers will find to be fascinating and enlightening.

Readers who wish to experience this provocative work can purchase“SHILOH 1ST Day: Turning Point of the American Civil War” at bookstores everywhere, or online at the Apple iTunes store, Amazon, Google Play, or Barnes and Noble.