Asmar Muhammad’s new book “Hollywood Marine Vision” is an adventure-packed work about a young black male whose military family sends him on a tour.

Recent release “Hollywood Marine Vision” from Page Publishing author Asmar Muhammad is a riveting wild adventure of a young black male as his military family sends him to the United Kingdom for a three-year tour, where his reading skills and knowledge about the world further grow, equipping him for great things. 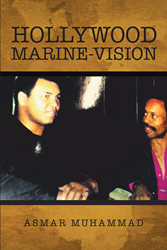 Asmar Muhammad, an author who has received various awards and loves working on cars and acting in films, plays, and television, has completed his new book “Hollywood Marine Vision”: a highly original story about a man who returns to the United States after learning more from a rich new country and joins the Marines despite risks.

Author Muhammad writes about the duties of a prince that are related to the military: “A prince should have no other aim or thought nor take up any other thing for his study but war and its organization and discipline, for that is the only art that is necessary to one who commands. It is of such virtue that it is not only maintained by those who are born princes, but often it enables men of private fortune to attain that rank. And one sees, on the other hand, that when princes think more of luxury than of arms, they lose their state. The chief cause of the loss of states is the contempt of this art, and the way to acquire them is to be well versed in the same.”

Published by New York City-based Page Publishing, Asmar Muhammad’s new book is an exciting story about a man’s road to enlightenment as he enters a new world in a new country, returns to the United States, goes against the war in the seventies, and joins the Marines. He also becomes a Hollywood actor with a “view of the galaxy of stars.”

Readers who wish to experience this enlightening work can purchase “Hollywood Marine Vision” at bookstores everywhere, or online at the Apple iTunes store, Amazon, Google Play, or Barnes and Noble.