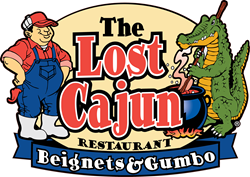 The Lost Cajun, a full service, family-friendly restaurant focused on authentic Cajun food and genuine Southern hospitality, has been named one of the top new franchises of 2018 by Entrepreneur Magazine. This is the first time the growing restaurant brand has been recognized for its rapid growth across the United States, landing at 89 out of 100 on the magazine’s annual Top New Franchises list.

Entrepreneur Magazine characterizes its Top 100 list as newcomers that are helping shape the franchise industry’s future with innovative products and services, creative marketing methods and ever-evolving technological tools, and credited them for offering new franchise owners the chance to latch onto the next big thing.

"We are beyond thrilled to be recognized for our rapid growth and be amongst the top restaurant franchises in the country," says Raymond Griffin, founder of The Lost Cajun. “Our goal is to be in the Top 10 next year and we will make it happen at the rate we are opening new locations because our concept is unique and offers a one of a kind market opportunity.”

The Lost Cajun recently opened its 15th location in Mansfield, Texas, and has plans to open five more in the next few months in multiple states. There will be more than 25 locations by the end of 2018.

The Lost Cajun stands today as the go-to restaurant for authentic Cajun food and hospitality. Fifteen years ago, Griffin owned a fishing lodge in Louisiana until Hurricane Katrina and other big storms hit, as well as damage from the big oil spill. Having had enough, he and his late wife moved to Colorado, where they opened the first Lost Cajun location in Frisco in 2010 with no restaurant industry experience. The first franchise opened in 2013 and locations soon spread across Colorado, Texas and to such outposts as Henderson, Tennessee, and Greenville, South Carolina. Further expansion is now planned throughout the country.

About The Lost Cajun
Founded in 2010 and franchising since 2013, The Lost Cajun is a family-friendly restaurant concept with a focus on authentic Cajun food and hospitality. Today, there are 15 restaurants open and operating in four states, with several others in various stages of development. For more information, visit http://www.thelostcajun.com