Canada’s Minister of Climate Change and Environment faltered in the House of Commons and on CTV’s Question Period with Evan Solomon, unable to answer how much a carbon tax would reduce emissions or warming, says Friends of Science. This has heightened public interest in Friends of Science Society’s 15th Annual Event – this year entitled “Extreme Climate Uncertainty.” 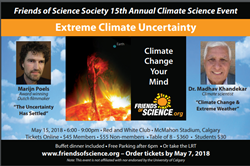 Minister McKenna’s inability to clearly explain what, if any, measurable benefits of the carbon tax is a glaring example of economically destructive, cavalier climate and policy-making that is not founded in thoughtful cost-benefit analysis.

Friends of Science Society’s 15th Annual Event theme of “Extreme Climate Uncertainty” couldn’t be more accurate they say, since Canada’s Hon. Catherine McKenna, Minister of Climate Change and Environment, failed to answer a question on the impact of the federal $50/tonne carbon tax on greenhouse gas emissions, as reported by pundit Brian Lilley on his blog, March 27, 2018. Days later, on CTV’s Question Period, McKenna was unable to answer related questions from host Evan Solomon, departing into a tirade about ‘climate change deniers.’

Political pundits and citizens burst into a twitter and facebook inflamed debate on the questionable merits of the deeply unpopular federal $50/tonne carbon tax.

Friends of Science Society says Minister McKenna’s inability to clearly explain what, if any, measurable benefits of the carbon tax is a glaring example of economically destructive, cavalier climate and policy-making that is not founded in thoughtful cost-benefit analysis. This is something they plan to address in their 15th annual event themed “Extreme Climate Uncertainty,” May 15, 2018, 6 pm, at the Red and White Club, McMahon Stadium, Calgary.

Friends of Science are honored to announce that Marijn Poels and Dr. Madhav Khandekar will be taking the podium.

For the policy section, award-winning Dutch filmmaker, Marijn Poels, will present his odyssey from progressive agent of change, working in developing nations, to bewildered European citizen, returning from a world of food insecurity to a new world of EU farms sprouting wind farms like mushrooms….but no potatoes. As he begins to explore the roots of this shift from farming to wind farming and biogas, he runs up against climate change dogma, and decides to make an independent film about it all entitled “The Uncertainty Has Settled.”

For the science section, Canadian climate scientist Dr. Madhav Khandekar will present a full discussion on “Climate Change and Extreme Weather.” Dr. Madhav Khandekar is a former Environment Canada researcher and world authority on the monsoon cycle. Dr. Khandekar has worked in the fields of weather and climate for 60 years. He has over 150 papers, reports, and book reviews in publication. He is on the editorial board of the Journal of Natural Hazards (Springer).

Friends of Science Society says they hope the “Extreme Climate Uncertainty” event will open up the public discussion on climate change theories and energy policies. Details via friendsofscience.org or Eventbrite (Calgary).

According to blog post “Just the Facts” by Ottawa energy policy consultant, Robert Lyman, the Paris Agreement is a meaningless, non-binding collection of platitudes. Lyman notes that the Paris Agreement will do nothing for the environment or climate, but it will destroy the Canadian economy if attempts are made to meet the 2 degree Celsius greenhouse gas reduction targets.

Friends of Science Society is an independent group of earth, atmospheric and solar scientists, engineers, and citizens who are celebrating its 16th year of offering climate science insights. After a thorough review of a broad spectrum of literature on climate change, Friends of Science Society has concluded that the sun is the main driver of climate change, not carbon dioxide (CO2).