Funded in part by the NFL, the PSA aims to break the silence and reduce the stigma around an often overlooked issue 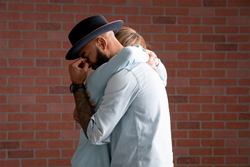 'I couldn't be more proud of our team for creating this beautiful, timely, and perfectly honest PSA,' said actor Anthony Edwards, who is on 1in6's Board of Directors.

In the fall of 2017, the #MeToo campaign took social media by storm, empowering survivors of sexual harassment and assault to share their experiences and raise awareness about the magnitude of the problem. While the campaign focused primarily on the systematic abuse of women, many men were also inspired to share their own stories, including celebrities like Anthony Edwards, Anthony Rapp, Terry Crews, and others.

Now, the nonprofit organization 1in6—in partnership with NO MORE—is releasing a public service announcement (PSA), funded in part by the NFL, to shed light on the reality that at least one in six men are survivors of sexual abuse or assault. The PSA aims to expand the public’s perception of what a survivor looks like through a creative and unexpected twist: after five women read first-hand accounts of sexual abuse or assault, it is simultaneously revealed to both the women and the viewer that these accounts belong to men, and that the men to whom the stories belong are present at the filming. Each woman and man proceed to have a candid conversation about what it means to acknowledge and support men who have had these experiences.

“We hope to dispel the myth that men are invulnerable, encouraging viewers of the PSA to have compassion for all survivors of sexual abuse and assault, regardless of their gender identity or expression,” said Andy Langdon, who leads 1in6's creative team and directed the PSA. “And if you’re a survivor who identifies as male, we encourage you to have compassion for yourself—it wasn’t your fault.”

This PSA is the first of its kind, transforming male sexual trauma from a stigmatized, private problem into an actionable community issue.

"While it’s true that more women are impacted by sexual violence than men, there is still a significant number of men who experience sexual trauma, and we need to make space to listen to them," said Tracy DeTomasi, Executive Director of NO MORE. "If we want to end the epidemic of sexual violence in our culture, we must listen to all survivors."

As it stands, there are limited resources available that speak to the unique challenges faced by men who have had these experiences, such as ingrained myths about manhood, and the social stigma and silence around the issue, which results in a lack of awareness. This means that many men repress their trauma and delay recovery, risking exposure to physical health issues, mental health issues, and social dysfunction.

“We have learned so much about the ways that sexual violence impacts people of every gender, age, race, and socioeconomic status,” said Anna Isaacson, NFL Senior Vice President of Social Responsibility. “We applaud 1in6 for their critical work for male survivors in particular, and we are proud to support their work.”

By raising awareness through this innovative PSA, 1in6 aims to 1) expand the cultural conversation to recognize that anyone (regardless of gender identity or expression, sexual orientation, age, race, ethnicity, culture, class, faith, or ability) can be a survivor of sexual abuse or assault and 2) introduce men and the people who care about them to the possibility of recovery. When men heal, not only are they able to live happier, healthier lives, but the people around them—including their families, friends, coworkers, and communities—benefit as well. In addition, 1in6 believes that men have a responsibility to engage in the movement to end sexual violence of all kinds, and that they will be more likely to do so if their experiences are acknowledged and their healing is supported alongside their bystander efforts.

"I'm honored to be joining the 1in6 Board of Directors in this important moment, and I couldn't be more proud of our team for creating this beautiful, timely, and perfectly honest PSA. Truth is powerful and so hopeful," said actor Anthony Edwards.

About 1in6
1in6 is a nonprofit organization whose mission is to help men who have had unwanted or abusive sexual experiences live healthier, happier lives. 1in6 also serves family members, friends, partners, and professionals by providing information and support resources on the web and in the community. In the 11 years since it was founded, 1in6 has become a leading voice in the anti-sexual violence movement, and has partnered with organizations and campaigns such as the Joyful Heart Foundation, NO MORE, RAINN, Men & Healing (Canada), Living Well (Australia), and Survivors Manchester (UK). In 2017, almost 400,000 visitors turned to the 1in6 website for support. For more information, visit 1in6.org.

About NO MORE
NO MORE is dedicated to ending domestic violence and sexual assault by increasing awareness, inspiring action and fueling culture change.

NO MORE is a groundbreaking, global initiative comprised of the largest coalition of nonprofits, corporations, government agencies, media, schools and individuals addressing domestic violence and sexual assault. We are a campaign of NEO Philanthropy, a 501(c)(3) public charity, and are committed to engaging, reaching and working with people from diverse communities. We work to amplify and grow the movement to stop and prevent domestic violence and sexual assault, in homes, schools, workplaces and communities around the world by creating innovative campaigns, partnerships and tools that leverage the power of the media, entertainment, sports, technology, and collective action.