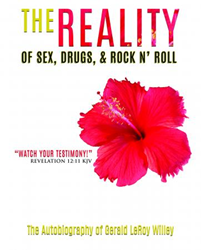 This life story relates to worldliness and depravity

The Scripture says if any man be in Christ, he is a new creation. Gerald Willey has experienced this firsthand in a powerful way.

“This life story relates to worldliness and depravity,” Willey states. “It creates a safe space for readers to reflect on their own emptiness. It encourages the acceptance of one’s past and presents the ultimate solution for despair--hope in Christ. This book is an antidote for all who are lost.

“For a long time, I thought that an interest in this book would be mainly from Christians,” the author adds. “I realized that the story of my life was not about Christianity, but rather about a lifetime of floundering. I recommend this book to those who are still seeking and have not necessarily found God’s joy.”

Gerald Willey is a professional singer, songwriter, author, actor, producer and an ordained pastor. As a recording artist, he produced and was the lead singer of his band One. The album by the same name was recorded and distributed by the Jefferson Starship’s record company, Grunt Records. Affiliated with RCA records. An American patriot, Willey wrote the song "One Nation Under God." He was formally on staff at the International House of Prayer in Kansas City, Missouri.

He is currently performing his new CD, S.O.S One Nation Under God, and is on tour through the bible belt of Tennessee. His new book, ABBA’s daily devotional with Jesus Christ, will be released in June internationally.

Xulon Press, a division of Salem Media Group, is the world’s largest Christian self-publisher, with more than 12,000 titles published to date. Retailers may order The Reality of Sex, Drugs, and Rock 'n' Roll: "Watch Your Testimony" through Ingram Book Company and/or Spring Arbor Book Distributors. The book is available online through xulonpress.com/bookstore, amazon.com, and barnesandnoble.com.