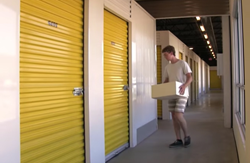 To accommodate growing demand for student storage locker units, a Kelowna storage company has expanded and already sold out of summer spaces popular with international students

As part of a growing trend of increased enrolment of international students from abroad, the Kelowna self-storage company has built dozens more locker units to accommodate students' needs.

"We have definitely seen a significant increase in international students using our storage lockers in recent years," says Yvonne Rogers, operations manager, Space Centre Storage. Such an increase, that in January, Space Centre built nearly 70 new storage locker units for the "spring rush" of international students about to place their things in storage before boarding planes and flying home for the summer.

Rogers estimates Space Centre provides summer storage to almost 350 international students studying in Kelowna. Because of its close proximity to the campus of University of British Columbia-Okanagan, Space Centre has become a convenient storage solution that quickly follows spring exams.

"Students in dorms have to move out the day of their last exam, which can be a stressful time so we try to make it as easy as possible for them by allowing them-or their parents-to reserve a locker online or over the phone ahead of time, and by helping to get them and all their possessions here."

It's common in the mid to late weeks of April for the Space Centre to send trucks to the campus once or twice a day to pick up students, along with their gear, so they can get their items into storage before heading to the airport to begin their journey home.

Rogers says most students fill either 4x6 or 5x8 storage locker units on their own or with friends, and items include all the necessities of student life in Canada, from textbooks and tote boxes containing clothes and winter coats to bar fridges, TV's, and gaming stations. Some students even store their wheels.

"We do have students who are studying here for a few years who use our vehicle storage to park their car here while they're away for the summer break."

Rogers says the storage offers security to students who will be far away in countries such as Korea, China, South Africa, and England for four or five months, but it's also about value.

By offering a free move-in truck in addition to a special deal in which they receive the fifth month free with four months pre-paid, international students at least get a break on their storage fees.

"This is very seamless and affordable for them," says Rogers. "When we see them, they've just been through exams and need to get their things in storage so they can catch a flight and get home. We're glad to be making this leg of their stay and their journey a little easier."