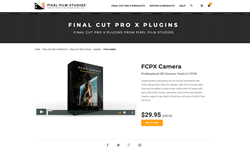 Create dynamic animations and 3D camera movements with FCPX Camera from Pixel Film Studios. With FCPX Camera users now have the ability to place media within 3D space. Users then have control over position, rotation, angle of view, depth of field blur, and more all within Final Cut Pro X.

With simple and easy to use tools with FCPX Camera from Pixel Film Studios, users can easily apply and adjust media. FCPX Camera allows users simply click and drag the effect directly onto footage and that’s it! Users then use the the on-screen controls to control the position and rotation of the camera with simple mouse movements.

FCPX Camera was professionally designed to work seamlessly inside of Final Cut Pro X. As an effect FCPX Camera can be dragged and dropped onto media and previewed in real time. With the published parameters found in the FCPX inspector, users have the ability to make further adjustments with just a few clicks of a mouse.