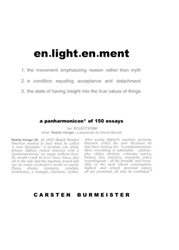 An Australia-based photographer and writer has released the latest edition of his thoughtful, idiosyncratic collection of 150 short essays that extrapolate upon words or concepts associated with cultural, political, spiritual, philosophical, and religious subjects.

In “en.light.en.ment,” author Carsten Burmeister taps into current events and modern discourse, unraveling a societal tapestry that invites readers to reflect on their own belief systems, question the status quo, and engage in informed, free-thinking dialogue with others in an often irreverent and humorous manner.

“With my book, I want to challenge readers to think about things as they never thought about them before,” Burmeister said. “I also want to entertain them and pique their interest and curiosity, to give them ammunition to start a conversation.”

“The goal of the book is to present a challenge and urge determined exploration, but the result is far from elitist, off-putting, or aggressive …,” a reviewer for Foreword Reviews wrote about the book.

A unique perspective on the multi-faceted issues faced by the modern world, this living book of essays aims to stimulate a diverse audience with relatable, though often controversial concepts and open an advanced societal dialogue about issues like war, God, guns, and intolerance.

About the author
Carsten Burmeister was born in Hamburg, Germany in 1947 and spent part of his adult years traveling and learning in the Netherlands, India, Denmark and Southeast Asia, ultimately settling in Australia in 1979. Burmeister’s spiritual journey began with a second trip to India in 1987, which inspired many of the insights included in “en.light.en.ment”. A long-time professional photographer, Burmeister is an avid blogger and enjoys meditating and studying Eastern and Western philosophies. To learn more, please visit http://www.carstenburmeister.com, read his blog and Dear Reviewer note, follow his Facebook page or subscribe to his YouTube channel. “en.light.en.ment” can be previewed here.