Renowned eighteenth-century scientist and visionary Emanuel Swedenborg wrote this short work to share the spiritual experiences he had in other worlds and to address the possibility of life on other planets. His effort offers a glimpse into how the philosophers and thought-leaders of his time sought to integrate science and religion in ways that are still relevant and meaningful today. 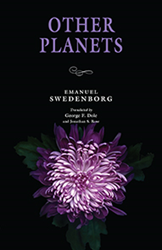 Other Planets by Emanuel Swedenborg

The New Century Edition of the Works of Emanuel Swedenborg presents a modern-language, scholarly translation of Swedenborg’s theological works. The series’ easy-to-read style retains the dignity, clarity, and gender-inclusive language of Swedenborg’s original Latin, bringing his thought to life.

One of the Swedenborg Foundation’s new titles of 2018 is now available. "Other Planets" provides a modern translation of Emanuel Swedenborg’s controversial work on the subject, which was first published in 1758. This new offering from the New Century Edition series guides readers through Swedenborg’s visionary journeys of the spiritual world, presenting a universe that is more unified and purposeful than we typically imagine.

Cast in the form of a travelogue, Swedenborg recounts having contact with the spirits of people who had lived on Mercury, Jupiter, and other planets and satellites in our solar system and beyond. This may come as a challenge for those who interpret it literally, but it is reflective of the eighteenth-century fascination with other worlds and travelers’ tales of distant cultures. As for demonstrating those deeper universal principles that unite the human with the Divine, "Other Planets" stands the test of time.

Also published under the titles "Earths in the Universe", "The Worlds in Space", and "Life on Other Planets", this work provides insights for new readers and seasoned students of Swedenborg alike: a clear statement of the fundamentals of Swedenborg's theology, and a sense that there are multiple ways of approaching belief and religious practice that can all lead to heaven.

"Other Planets" is available in paperback for $6.99 and e-book editions for $1.

Author: Emanuel Swedenborg (1688-1772) was a Swedish nobleman widely known as a scientist, engineer, inventor, and (in later life) visionary theologian. A graduate of Uppsala University, he spent most of his career as an overseer on Sweden’s Board of Mines, and he was also a member of the Royal Swedish Academy of Sciences and an active member of the Swedish parliament. He is best known for his prolific theological writings, which he produced and published following a spiritual awakening in his mid-fifties, and for the substantial influence those works have had on philosophical thought and spiritual/religious movements in the centuries since his death.

Translator: George F. Dole holds a BA from Yale, an MA from Oxford, and a PhD from Harvard. Now professor emeritus, Dr. Dole taught ancient languages, the Bible, and theology at the Swedenborg School of Religion in Newton, Massachusetts.

Translator: Jonathan S. Rose is the series editor of the New Century Edition of the Works of Emanuel Swedenborg. Holder of a BA and an MDiv in religion and an MA and a PhD in Latin, he has worked for years in the study of Neo-Latin and in Swedenborgian research.

About the New Century Edition

The New Century Edition of the Works of Emanuel Swedenborg presents a modern-language, scholarly translation of Swedenborg’s theological works. The series’ easy-to-read style retains the dignity, variety, clarity, and gender-inclusive language of Swedenborg’s original Latin, bringing his thought to life. Introductions and annotations by eminent, international scholars place Swedenborg’s writings in their historical context and illuminate obscure references within the text, enabling readers to understand and trace Swedenborg’s influence as never before.

About the Swedenborg Foundation

The Swedenborg Foundation is a 501(c)(3) nonprofit, independent, educational organization that explores faith and spirituality based on the prolific writings left behind by eighteenth-century spiritual explorer Emanuel Swedenborg. In addition to book publishing, the Foundation also produces a highly-rated weekly webcast called Swedenborg and Life on the offTheLeftEye YouTube channe l and generates content for multiple social media communities and two blogs for spiritual seekers and academic scholars.