Cal Field Hockey Camps, a division of US Sports Camps, the largest provider of sports camps in the world, hosted its Cal Spring Tournaments over two weekends in the month of March. 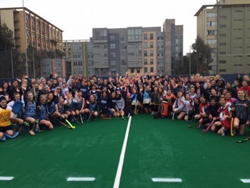 This tournament saw 88 teams and over 500 athletes over the course of the weekend.

These Bay Area field hockey tournaments were held at the state-of-the-art Under Hill Field on the UC Berkeley Campus.

The first weekend of Cal Spring Field Hockey Clinics saw a 6v6 tournament for U12, U14, U16, and U19 boys and girls. This tournament saw 88 teams and over 500 athletes over the course of the weekend. The tournament was hosted by Cal Berkeley Head Field Hockey Coach Shellie Onstead and Assistant Coach Austin Pile.

The second weekend was a Tiny Tournament for U6, U8, U10, and U12, both boys and girls. This tournament saw over 100 youngsters and was also directed by Onstead and Pile.

Onstead and Pile will be directing a summer California field hockey camp as well, open to both boys and girls. This Bay Area summer camp will go Thursday - Sunday and is designed for all skill levels. Over the four days of camp, athletes will train in a focused and safe environment with the main goals being building passion for the sport and building a better understanding of the game. The Cal Field Hockey Camp is also a partner of USA Field Hockey and is sanctioned to make referrals to USAFH Futures program.

US Sports Camps (USSC), headquartered in San Rafael, California, is the world's largest sports camp network and the licensed operator of Nike Sports Camps. The company has offered summer camps since 1975 with the same mission that defines it today: to shape a lifelong enjoyment of athletics through high quality sports education and skill enhancement.