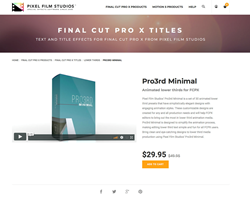 Pro3rd Minimal features 30 pre-animated simplistically elegant lower third designs. Choose from an array of adjustable design styles that include both left aligned and right aligned options for each preset. Pro3rd allows FCPX users to drag each preset into the FCPX timeline while able to stylize the text, and recreate designs with easy to use on-screen controls.

Created for Final Cut Pro X, Pro3rd Minimal presets are completely customizable. At the top right of the Final Cut Pro X screen is a list of parameters that are customizable in the inspector window. Adjust color, text as well as speed easily with just a few clicks of the mouse! Finally, utilize Edit Mode to isolate and adjust text position, color, and font of Pro3rd Minimal.