Sen. Bill Haine (D-Alton) is being honored with Southern Illinois University Edwardsville’s Distinguished Service Award. SIUE will present the award during the University’s Spring 2018 Commencement to the life-long Alton resident 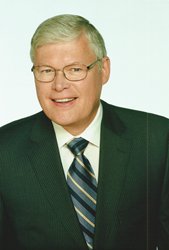 Sen. Haine has been an enthusiastic advocate for both SIUE and the SIU School of Dental Medicine in Alton

Senator William “Bill” Haine (D-Alton) is being honored with Southern Illinois University Edwardsville’s Distinguished Service Award. SIUE will present the award during the University’s Spring 2018 Commencement to the life-long Alton resident, who has proudly served Madison County, the state of Illinois and the United States.

“Sen. Haine has been an enthusiastic advocate for both SIUE and the SIU School of Dental Medicine in Alton,” SIUE Chancellor Randy Pembrook said.

Haine is the senator for the Illinois 56th Senate district, which covers most of Madison County, including Alton, Wood River, Edwardsville and part of O’Fallon. After serving 14 years as Madison County state’s attorney, Haine was elected to the Illinois Senate in 2002. He began his public service on the Madison County Board in 1978 and has served more than 40 years in elected office.

Haine currently serves as assistant majority leader and is vice-chair of the Insurance Committee. He is the senior Democrat on the License Activities and Pensions Committees, as well as being a member of the Judiciary, Criminal Law and Veterans Affairs Committees. He also serves on the Governing Committee of the Legislative Reference Bureau.

Haine’s commitment to the Metro East and its residents has been a hallmark of his tenure in public service. He helped pass a plan to update and fix the levee system in the Metro East. He made efforts toward key infrastructure upgrades on I-255. Additionally, he rallied the Illinois Senate to formally demand that Congress and the President review the national tariff policy on steel goods when U.S. Steel in Granite City announced it was going to close.

In the Senate, Haine was a leader in the implementation of medical malpractice litigation reforms with the strong support of the Illinois Medical Society. For his work, the Illinois Hospital Association presented their highest award –“Excellence in Public Service” – to him.

Haine believes state funding is crucial to Illinois schools, and he secured funding for many buildings, such as the new science building and the residence halls at SIUE. He also secured state money for the construction of the new lab at the SIU School of Dental Medicine. He led the effort to obtain state funding for the operation of a City of Edwardsville Fire House on the SIUE campus.

Haine’s votes to increase the state income tax in 2011 and in 2017 assured state funding for university systems and for MAP grants to students. He was a strong and early supporter for the reform of the formula that allocates state money to public school districts.

Haine has served on the Dean’s Advisory Board for the SIU School of Dental Medicine. He also supported the University during the state budget crisis, fighting against potential cuts to higher education.

Haine is a member of many organizations, including the Knights of Columbus and Veterans of Foreign Wars, the American Legion Post 204, where he is a past commander, and the Alton Cemetery Board of Trustees.

Haine is a Saint Louis University alumnus who also earned a Juris Doctorate from SLU.

Southern Illinois University Edwardsville provides students with a high quality, affordable education that prepares them for successful careers and lives of purpose to shape a changing world. Built on the foundation of a broad-based liberal education, and enhanced by hands-on research and real-world experiences, the academic preparation SIUE students receive equips them to thrive in the global marketplace and make our communities better places to live. Situated on 2,660 acres of beautiful woodland atop the bluffs overlooking the natural beauty of the Mississippi River’s rich bottomland and only a short drive from downtown St. Louis, the SIUE campus is home to a diverse student body of nearly 14,000.