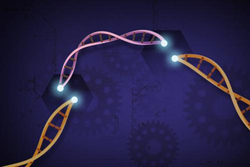 “This new model will be a game changer in our efforts to develop therapies for diabetes. Our efforts to regenerate disease cell types, create new pancreatic cell types, or growing transplantable human cells in pig models will receive a much needed boost,” says Telugu.

Diabetes is a ‘new-age’ epidemic with ever-increasing rates of disease and death across the globe. Diabetes manifests as a loss of insulin production and/or secretion and an inability to regulate glucose levels in the blood. Currently, an emerging trend in the diabetic field is to employ gene therapy to regenerate patients’ pancreatic cells and/or transplantation of patients’ stem cells into surrogate animal models to generate patient-specific pancreas. That said, animal models to test the safety and efficacy of these approaches are limiting. To address this shortcoming, researchers from UMD’s College of Agriculture and Natural Resources have used CRISPR/Cas9 technology to target the Neurogenin 3 (NGN3) gene in the pig, resulting in a pig model with a complete loss of endocrine function. Using this loss of function study, the research team concluded that NGN3 regulated development of the pancreas in a pig model is similar to the process in humans, setting the stage for a thrilling new model to test diabetic therapies, and for generating human organs in pigs.

Dr. Bhanu Telugu, assistant professor in the college’s Animal and Avian Sciences department, along with a team of researchers in his laboratory, including lead-author Timothy Sheets (a pre doctoral candidate) and Drs. Ki-Eun Park and Chi-Hun Park have produced the first demonstration of a targeted gene mutation induced by CRISPR/Cas9 in a large animal model that resulted in a complete loss of endocrine function. Furthermore, these results are the first demonstration in any species using CRISPR/Cas9 technology specifically targeting NGN3.

“This new model will be a game changer in our efforts to develop therapies for diabetes. Our efforts to regenerate disease cell types, create new pancreatic cell types, or growing transplantable human cells in pig models will receive a much needed boost,” says Telugu. “Additionally, this model gives us a new range of treatment possibilities and dovetails strongly with the college’s initiative to study and influence the intersection of human, animal and environmental health.”

Recent progress in gene therapies and the practice of generating human organs within large animal models is a popular topic in the news cycle, but public records of success may be a long way off. This model paves the way for testing the feasibility, efficacy and safety of this approach. An ultimate goal of Telugu’s lab is to utilize transplantable cells from the patient in need of an organ, and use those to generate a transplantable organ in a whole pig animal setting.

Their report, “Targeted Mutation of NGN3 Gene Disrupts Pancreatic Endocrine Cell Development in Pigs”, was recently accepted and published by Scientific Reports. It can be accessed here: https://www.nature.com/articles/s41598-018-22050-0.